Mugabe Has Left, but His Legacy Haunts Zimbabwe’s Election 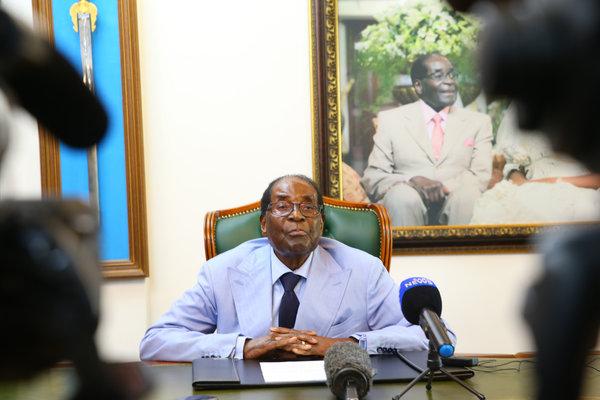 The July 30 vote will be the first since the resignation of Robert G. Mugabe, Zimbabwe’s leader since independence.

HARARE, Zimbabwe — When Robert G. Mugabe stepped down as Zimbabwe’s president last fall, jubilant citizens poured into the streets of Harare, the capital, hoping that the end of his 37-year rule would lead to competitive multiparty elections and the revival of a moribund economy.

But as campaigning intensifies ahead of elections on July 30 — the first without Mr. Mugabe’s name on the ballot since independence in 1980 — the ex-president’s heavy legacy hangs over the country.

The political party Mr. Mugabe led for decades is now represented by Emmerson Mnangagwa, a former vice president who has been accused of organizing brutal repression during Mr. Mugabe’s rule. The opposition has been fractured and weakened after the death this year of its longtime leader, Morgan Tsvangirai, who challenged Mr. Mugabe in successive elections in 2002, 2008 and 2013.

The 2008 vote was marred by deadly postelection violence, and observers fear a recurrence this year in the contest between Mr. Mnangagwa and the new opposition leader, Nelson Chamisa. Already, there are accusations of threats, intimidation and vote tampering. Last month, a grenade tore through a rally, narrowly missing Mr. Mnangagwa, killing two of his aides and injuring several others. Who set off the grenade is unknown, but suspicion has fallen on members of a rival faction in the governing party, ZANU-PF.

Zimbabweans seem less interested in the political intrigue than in high unemployment and persistent inequality. Once one of southern Africa’s wealthiest economies, Zimbabwe experienced a severe deterioration in industry and agriculture during the 1990s. As Mr. Mugabe moved to seize land concentrated in the hands of the white minority that once controlled the former British colony, investors pulled out their money, leading to currency devaluation and soaring inflation. The country is crippled by debt.

“Mnangagwa doesn’t represent the interests of the black majority here,” said Stanley Hungwe, 32, who studied sociology at the University of Zimbabwe and is one of many jobless college graduates. “Look at how he has projected himself as a darling of the Western countries whose interests he represents, instead of our own interests.”

Terrence Chiwawa, 46, a schoolteacher waiting to withdraw money from a bank in Harare recently, complained about a chronic currency shortage.

Newer Post
Survivors Of Past Political Violence Will Monitor This Year’s Elections In Zimbabwe
Older Post
Zim on right trajectory: US envoy