DEPOSED President Robert Mugabe and his wife Grace were yesterday named in businessman Wicknell Chivayo’s shady $7 million Gwanda solar project, as members of the Parliamentary Portfolio Committee on Mines and Energy demanded to know how his relationship with the former First Family influenced the awarding of lucrative tenders to his company, Intratrek. 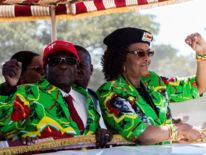 The other bigwigs that were dragged into the tender saga include former Energy ministers Dzikamai Mavhaire and Samuel Undenge, Deputy Chief Secretary to the President and Cabinet Justin Mupamhanga and the late State Procurement Board (SPB) boss Charles Kuwaza.

Chivayo had been summoned to speak on the controversial multi-million dollar solar project after it emerged that his company initially lost the tender, but was later given the job after he personally appealed to Mavhaire, instead of the courts.

Later, when Undenge took over as Energy minister, Chivayo allegedly approached the minister and caused the Zimbabwe Power Company (ZPC) to pay him $5,6 million for works which had not commenced, and without a bank guarantee.

Committee member and Zengeza West MP Simon Chidhakwa (MDC-T) grilled Chivayo demanding him to explain how he managed to manipulate ZPC to pay in advance and whether he had used Grace to get the payments authorised by Undenge.

“I am not related to the former First Family and at no time did they interfere or assist me to ensure the tenders were awarded to me by the SPB. The First Family have no influence in the SPB,” Chivayo said.

Committee chair Temba Mliswa joined in the grilling, saying: “The MPs are asking that question because the First Lady, Grace, was the government in power and that is why Parliament impeached Mugabe. Did she not influence the decision that you be awarded the contract and get paid, which prompted Undenge to take the matter to Cabinet?”

In response, Chivayo said he had applied for the tender in 2013 when Mavhaire was Energy minister and the contract was then signed in 2015 when Undenge had taken over as minister.

Chivayo also denied insinuations that his social media stunts, where he posted pictures of himself dining with Grace, were meant to confirm that he was well-connected.

Musikavanhu MP Prosper Mutseyami (MDC-T) asked Chivayo to explain if he was a criminal and how the SPB awarded a multi-million-dollar ZPC solar project to a known criminal.

Magwegwe MP Anele Ndebele (MDC-T) also asked Chivayo to explain if he was a qualified engineer.

Chivayo responded: “I have no qualification, I am not an engineer. I was convicted in 2005 for confiscation of profits and money-laundering and I served for 24 months and then filed an appeal in the Supreme Court, which is still pending.”

The businessman also told Parliament that he got 225 hectares of land for the project, which he said was given to Intratrek by the Lands ministry.

But Intratek’s second shareholder Yusuf Ahmed’s lawyer, Bruce Tokwe, of Tokwe Law Commercial Chambers, told the legislators that Chivayo had ceded his 50% shareholding in 2014 and was now only working as a managing director.

Tokwe described Chivayo’s business practices as shoddy, adding that he never respected corporate governance issues relating to management of companies, adding that the $5,6 million received from ZPC was not disclosed to the other shareholders.

“We are at risk and our names are being tainted. We have tried to negotiate with Chivayo on the progress of the project and get documents, and asked questions as to what happened to the money. We have even approached ZPC,” Tokwe said.

He said Intratrek was not considering changing its management and board, adding that they had the financial clout to finish the project after Chivayo failed to do so.

Chivayo denied reports previously made by ZPC board chairperson Stanley Kazhanje when he appeared recently before Parliament that he was paid $7 million in advance.

The businessman approached a Chinese firm, Chint Electric, which has an asset base of $12 billion, to be his partners in the $173 million solar project.

Asked to explain how he was paid the $7 million and whether he also paid Undenge a bribe to ensure that ZPC paid him without work having commenced, Chivayo said: “I never paid a cent to Undenge. I was paid $2,1 million for the feasibility study, which was done by Chint Electric. I went to ZPC managing director Noah Gwariro and presented an invoice and he refused to pay, saying for advance payments, they needed a bank guarantee. I then went to Undenge, who then instructed Gwariro that the project must proceed. If ZPC said they paid me $7 million, it is incorrect.”

Chivayo told MPs that he was only paid $5 million for the project, outlining that $2,1 million was paid for a feasibility study done by Chint Electric (Chinese partners) in December, adding that other works done were pre-fencing, geological surveys and designs for access roads.

The committee noted that Chivayo rushed to do the pre-fencing after Mugabe was removed from power.

“To date, a total of $5,6 million was released to Chivayo, of which $2,1 million was for the feasibility study. So, we remain in exposure on the amount of work not yet delivered. Through pressure from the ministry, we had to release the money to Chivayo without a bank guarantee,” Chirikuutsi said.

The ZPC boss said Kazhanje was the one who interfaced with the highest offices in government.
The committee then chucked out the ZPC crew, saying they could not continue to grill them because they had failed to appear before Parliament with their full board members, including Kazhanje.