Mugabe to be buried in 30 days

Former Zimbabwean president Robert Mugabe will be buried at Heroes’ Acre in 30 days, this is according to his nephew Leo Mugabe. 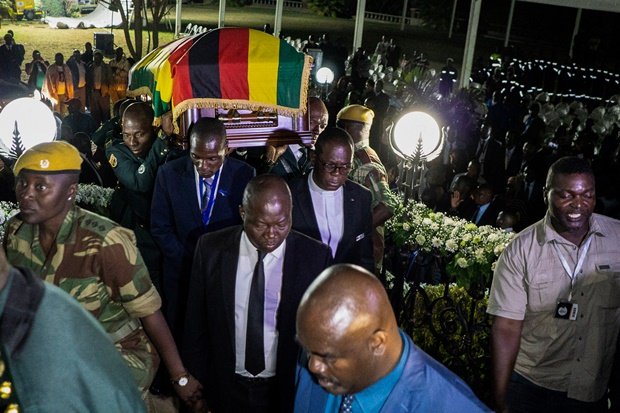 Former Zimbabwean president Robert Mugabe will be buried at Heroes’ Acre in 30 days, this is according to his nephew Leo Mugabe.The junior Mugabe briefed journalists on the development at the former statesman’s Blue Roof mansion in Harare on Friday.Mugabe died at the age of 95 at a Singaporean hospital. His remains returned to Zimbabwe on Wednesday and have been lying in state at Rufaro stadium.

There has been tension between his family members and the Zimbabwean government over where the former leader should be laid to rest, with some from the Mugabe family saying he wanted to be laid to rest in his home village of Zvimba.

Residents of Harare pay respects to Mugabe in Rufaro Stadium

Members of the public pass before the coffin containing former President of Zimbabwe Robert Mugabe. The family of Mugabe have agreed to bury him at a monument for national heroes in Harare, though the date for the ceremony is still unclear.

He will be buried as a chief.

“He is going to Zvimba so the people of Zvimba can pay their last respects,” said Mugabe junior.

Meanwhile, several dignitaries from across the continent have started making their way to Zimbabwe for the memorial service set to take place on Saturday at the national stadium.

President Cyril Ramaphosa will be accompanied by a delegation made up of International Relations and Cooperation Minister Naledi Pandor, Defence Minister Nosiviwe Mapisa-Nqakula, Police Minister Bheki Cele and State Security Minister Ayanda Dlodlo when he attends the state funeral of former president Robert Mugabe in Harare, Zimababwe, on Saturday.

“The president’s attendance signifies South Africa’s regard and gratitude for the role played by the late former president Mugabe in his capacity as leader of Zimbabwe’s pre-independence liberation movement and as president of the Republic of Zimbabwe in support of South Africa’s struggle against apartheid,” presidential spokesperson Khusela Diko said in a statement on Friday.

Newer Post
Leo Mugabe says ‘there will be no person in the coffin’ #mugabeburial
Older Post
Robert Mugabe: African leaders gather in Zimbabwe for state funeral