No UK reps at UNWTO General Assembly in Victoria Falls

The British government will not be sending any representatives to a global tourism conference sponsored by the United Nations, due to take place in Zimbabwe later this month, according to reports.

According to the Times UK newspaper, Britain has decided not send a single official to the conference, “despite hopes in Harare that the country would be welcomed back into the family of nations”.

Earlier this week the British government expressed serious concerns over the conduct of the harmonized elections that took place in Zimbabwe last week, acknowledging ballot rigging and fraud that are at the centre of a legal challenge being prepared by the MDC-T. 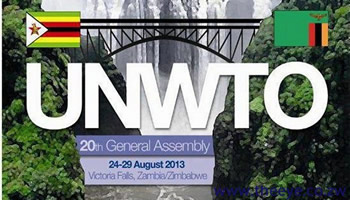 The Mugabe regime has been promoting UNWTO as part of efforts to promote its image on the global stage and boost tourism, which was once one of the key providers of foreign currency for Zimbabwe, before ZANU-PF’s chaotic land reform program and human rights abuses undermined the sector.

The London based Zimbabwe Vigil protest group welcomed the UK decision not to participate at the conference. Vigil spokesman Dennis Benton said they were afraid that the UK was so determined to re-establish relations with Mugabe that they would just accept this rigged election.

“We regard the conference as ludicrous and hypocritical when you consider what the Mugabe regime has done to the  (wildlife) conservancies in particular and to the general country as a whole. They have destroyed agriculture and with it a lot of the wildlife in the country has been endangered,” Benton explained.

Criticizing the U.N. Benton said: “Mugabe’s friends are people like the Russians, the Iranians and the Chinese. Every rogue regime in the world is behind Mugabe and these people still have a lot of influence with the United Nations. One must recognize that the rest of the world does not really know what is going in Zimbabwe.”

Benton added that the Mugabe regime devotes large sums of money and energy into promoting their version of what is going on in the country. He said part of the Vigil’s struggle over the years has been to expose them.

The U.N. has been criticized for choosing to hold the annual event in Zimbabwe, given the government’s failure to protect wildlife and evidence pointing to corrupt officials benefiting from illegal poaching and hunting activities.

The Zim authorities have gone to great lengths to bring this event to Victoria Falls, hoping that a spotlight on this key tourist attraction will boost the country’s profile.

They are also hoping that hosting a major U.N. conference will give the Mugabe regime some semblance of legitimacy and serve as a first step to re-engaging the international community of nations.

But last week’s disputed election has shifted the spotlight and the focus is now on a growing mountain of evidence supporting opposition claims that the poll was rigged and there are increasing allegations of retaliation by Mugabe’s supporters, on any one suspected of having supported the opposition.

via No UK reps at UN tourism meeting in Zim | SW Radio Africa.