AS the Second Republic moves to clear a 1,2 million housing waiting list backlog, colonial structures in the country’s old suburbs will be pulled down to build back better facilities that are in tandem with the country’s vision to be an upper-middle-class economy by 2030, President Mnangagwa has said.

Speaking at the launch of the Zimbabwe National Human Settlements Policy (ZNHSP) and the commissioning of the Marimba Flats project in Harare yesterday, the President said his Government, through the Ministry of National Housing and Social Amenities, is spearheading the development of modern and affordable urban and rural human settlements and social amenities in a coordinated and sustainable manner.

Under ZNHSP, the country aims to build 225 000 housing units by 2025 with construction, which will have a ripple effect on other sectors of the economy such as the manufacturing industry, already underway.

In Harare, the modern blocks of flats that were commissioned by the President will benefit health sector workers with similar projects lined up in other parts of the country.

“These housing units are being allocated to medical doctors, who form part of our frontline workers in the fight against the pandemic and are a key cog in our quest to achieve universal health coverage.

“The provision of such institutional accommodation is part of my Government’s commitment to avail non-monetary incentives for the sterling efforts that medical personnel continue to make towards ensuring the well-being of all citizens countrywide.

Following the unfortunate fire incident that gutted the Doctors’ residence at Mpilo Hospital in Bulawayo, and my subsequent visit to assess the damage, it is commendable that the reconstruction and modernisation of the affected blocks are now almost complete,” he said.

Added the President: “My Government, through the Ministry of National Housing and Social Amenities, has also embarked on a housing programme dedicated for public servants, with discussions on financing modalities already at an advanced stage.

“The process must be speeded up to ensure that the housing programme begins in earnest. This way, our dedicated public servants will be guaranteed of decent accommodation commensurate with their strategic national importance.”

The modernisation of settlements, he said, is not only in line with the country’s Vision 2030 but also resonates with the African Union’s Agenda 2063 and the United Nations’ Sustainable Development Goals (SDGs), benchmarks that enhance the quality of life and contribute towards sustainable economic growth.

“At the same time and in a bid to give dignity to disadvantaged sections of our society, Urban Regeneration of degrading colonially established suburbs such as Mbare, Makokoba, Sakubva and Mutapa, among others, is being pursued with vigour and tenacity.

“In these and other areas, the provision of small and medium enterprises workspaces is being prioritised. We are going to pull down the colonial structures in Mbare, Makokoba, Sakubva and Mutapa.

“The Second Republic will leave no stone unturned towards restoring order, dignity and access to basic services and social amenities by our people,” President Mnangagwa said.

Already the Sakubva Urban Renewal Project that was launched by the President in 2018 through a partnership with BancABC is underway in Mutare.

The Second Republic will also, through the policy, address the inadequacies of existing infrastructure to cater for the demands of the growing population with the processes for the regularisation of dysfunctional and irregular settlements already underway.

Articulating the ZNHSP, the President said the policy will, among other things, provide guidelines on all human settlements in the country, address issues concerning the provision of both on-site and off-site infrastructure before the construction of houses.

“It also takes into account the impact of dysfunctional settlements, the land barons scourge, as well as the issue of spatial planning, densification, and adoption of appropriate technologies, including modern housing structures adapted for climate change and resilience.

“The new policy extends the scope of housing beyond urban and peri-urban centres to rural and farming communities.

“In this regard, I urge farmers to use their earnings from the last successful cropping season to modernise and improve the quality of their household infrastructure and amenities.

“This will enhance the attractiveness of our rural communities, stem rural to urban migration, and promote further development of rural industry systems as we seek to industrialise our rural areas.

“The National Human Settlements Policy further captures Government’s preference for the development of flats as opposed to stand-alone units.

“Vertical construction reduces the scourge of urban sprawl and maximises on the effective use of the land available for urban expansion as densification significantly reduces the cost of providing on-site and off-site infrastructure”. 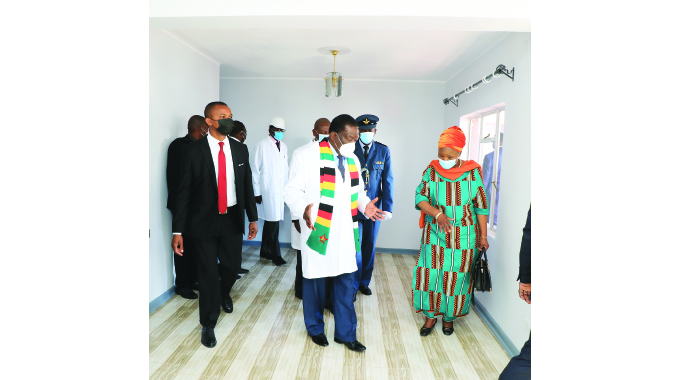 With the ZNHSP in place, the country is now on the path to an orderly and well-built environment as opposed to the previous scenario where land barons illegally parcelled out land without offering the requisite infrastructure.

“The housing sector is open for business. A boom in the built environment invariably triggers sector-related manufacturing activities.

“These include in upstream and downstream linkages such as the production and supply of aggregates, cement, timber, iron and steel, chemicals, electrical machinery and apparatus as well as financial and real estate services. It also provides an immediate impact on job and wealth creation, skilled artisans, women and the youth.

“I, therefore, invite domestic and international investors to consider Zimbabwe as a destination of choice when making real estate investment decisions.

“The Second Republic, through its engagement and re-engagement drive, has already created an investor-friendly business environment.

“In the same vein, I also encourage the establishment of non-fiscal housing development financing mechanisms such as Public-Private Partnerships (PPPs) and joint ventures.

“I am pleased that our financial institutions, pensions and provident funds, and some corporate players are participating in the housing delivery agenda. I also call upon our building societies and the financial services sector in general to provide mortgages and other financing options at affordable rates.”

The President said he is confident that Minister Garwe and his team will be able to lead the provision of houses in the country.

“Mutsvairo mutsva unonyatso tsvaira, he is a new broom and he will deliver,” the President said.