Fearing the implications of a victory for President Robert Mugabe’s Zanu (PF), urban dwellers in and around Harare have been stocking up on basic commodities.

Citizens from mostly urban areas said victory for Mugabe’s party had the potential to plunge the country’s economic fortunes back to the 2008 era. 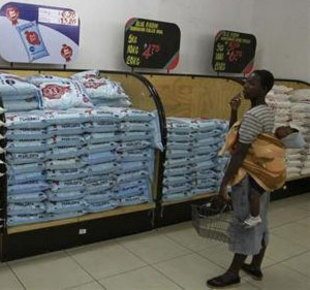 Shoppers stock up on basic goods

A woman at Avondale shopping centre only identified as Dadirai said: “If it is true that Zanu (PF) is going to emerge the winner of this election, then we might as well brace ourselves for empty stomachs”.

Addressing journalists at Harvest House today, leader of the MDC-T, Morgan Tsvangirai, warned that because of the shoddy manner in which the election had been conducted, the outcome had the potential to “plunge the country into a serious crisis”.

Dadirai said victory for Mugabe confirmed her worst fears, the bringing back of the local currency.

In recent campaigning speeches, Mugabe indicated that if elected back into power, he would work towards ensuring the return of the local currency.

“We have already sat down with the reserve bank governor Gideon Gono to find ways of ensuring that our local currency gains value,” said Mugabe at the launch of the party’s election manifesto at Zimbabwe Grounds in Highfield, Harare.

He indicated that the return of the local currency would be a process.

Another shopper, Shadreck Hwada, expressed concern that because Zanu (PF) was in the habit of changing things ‘overnight’, the possibility of ‘waking up’ to a local currency was very high.

“The party is a law unto themselves and I fear that we are going to revert back to the 2008 era. Better safe than sorry, I am stocking up on food supplies,” he said.

via Panic buying as Zanu (PF) wins | The Zimbabwean.