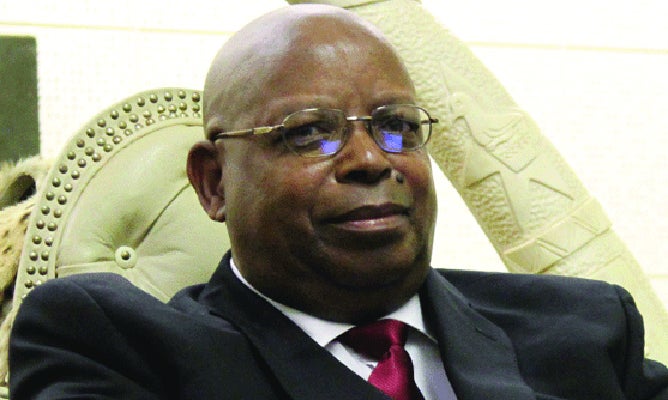 PARLIAMENT is attempting to broker a deal to end the political stand-off between President Emmerson Mnangagwa and opposition leader Nelson Chamisa in the face of renewed international pressure for dialogue.

Zimbabwe is suffering its worst economic crisis in a decade and talks between the two main political players are seen as key to reviving a country that was once dubbed the “breadbasket of Africa”.

Chamisa, who leads the opposition MDC and lost a disputed presidential election last year, maintains that Mnangagwa stole the vote with the help of the Zimbabwe Electoral Commission, but has noticeably stopped describing his rival as “illegitimate” recently.

Sources familiar with the matter told NewsDay that the Speaker of the National Assembly, Jacob Mudenda, has set up a team of negotiators who are shuttling between Munhumutapa government offices and MDC headquarters in an effort to bring the two political protagonists to the negotiating table.

“Mudenda has received briefings from a lot of diplomats who have
impressed on him the need for an inclusive national dialogue. He is well aware that in the absence of Chamisa and Mnangagwa smoking a peace pipe, things will get worse and could lead to instability in the country,” one source said.

Another source in the MDC said in an effort to lure the opposition, Mudenda is pushing to ensure Parliament fast-tracks critical electoral reforms and has engaged the Zimbabwe Electoral Support Network (Zesn) to help craft a comprehensive draft Bill which captures recommendations made in the observer mission reports on the 2018 general elections.

“At the core of the dispute is how elections have been run in this country, the laws, how the Zimbabwe Electoral Commission has failed and all these things are captured in a compendium of recommendations by election observer missions, which were compiled by Zesn,” the source said.

“The same organisation has also petitioned Parliament on these reforms and the Speaker’s people assured the MDC that he will be pushing for these reforms.”

Mwonzora, who was part of the team that went on a diplomatic trip to the Scandinavian nation led by Mudenda, said the Speaker advised the Swedish authorities of his efforts to get the talks going.

“It is not factually correct that the Speaker and his delegation faced hostility from the Swedish authorities. The Speaker and his delegation were well received and all discussions were frank and cordial. Further, the Speaker advised the authorities that he had initiated a process to ensure dialogue between President Mnangagwa and the MDC president, Nelson Chamisa. He specifically indicated that there were overtures to the MDC Alliance party to have an inclusive national political dialogue,” Mwonzora wrote in a report about the trip to his party.

Mudenda reportedly also told the Swedish authorities that his legislative agenda involved getting help from Zesn to align the Electoral Act to the country’s Constitution.

“The Speaker also advised that he had tasked Zesn, (which is) composed of 30 civil society organisations, to revise the Electoral Act so that the same would be in line with the Constitution and international best practice. This follows Zesn’s petition to Parliament,” Mwonzora
wrote.

Mnangagwa has already opened meetings with other fringe political parties and independents who contested in the 2018 presidential elections, but Chamisa and his party have refused to be involved because the talks were not curated by a neutral convenor.

Mudenda said he would not comment on the matter in the Press or public.

“We do not comment on these issues in the Press, it will be jumping the gun. Why don’t you allow the people who are doing what they are doing to finish what they are doing and then you can write.
The media should play a developmental and nation-building role,” he said.

MDC spokesperson Daniel Molokele said he was not aware of any overtures by Mudenda to bring Chamisa to the negotiating table with Mnangagwa.

“You are actually breaking news for me, I am not aware of that. I am actually clueless,” he said.

Zanu PF spokesperson Simon Khaya Moyo was not immediately available for comment as he was not answering his phone.

Meanwhile, Chamisa, together with his deputy Tendai Biti, returned from his diplomatic offensive tour of West Africa, where they met political party leaders, former heads of State and government and other officials to ramp up pressure for political talks back home.

The trip, which ended in Sierra Leone, started in Nigeria, where Chamisa and Biti were joined by former President Olusegun Obasanjo. The team combined the diplomatic offensive with promoting a book co-written by Biti and Obasanjo.

MDC deputy spokesperson Luke Tamborinyoka said the trip was an important diplomatic offensive, which had yielded many positive results all in an effort to ensure that Mnangagwa buckles to a political settlement over the crisis in Zimbabwe.

“The diplomatic offensive is going on well. President Chamisa … is tapping on the wisdom of those elders and its going on well … I can’t tell you the whole trajectory, but we are going to mount political and diplomatic pressure and we are well on course,” he said.