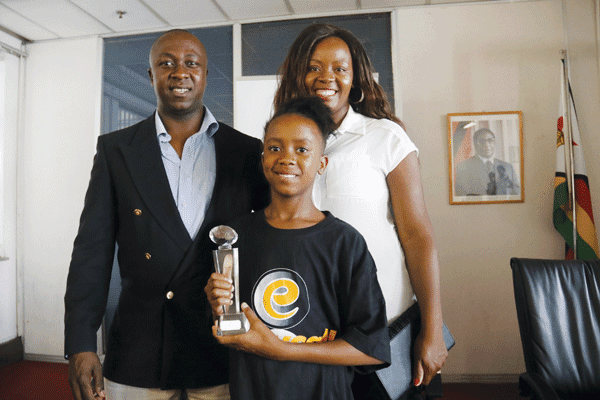 Gweru businesswoman and philanthropist, Smelly Dube has said she would start financially helping female motorcross rider Tanya Muzinda in all her sporting endeavours after the 14-year-old failed to travel to Ghana to receive an award at this year’s Child Summit and Awards held in Accra due to the financial challenges.

Muzinda, also an honorary ambassador of the European Union to Zimbabwe for youth, gender, sports and development, received the award under the African Child Sport Personality of the Year category.

Dube, who was in Ghana at the awards ceremony last Saturday, where she was honoured with a certificate in recognition of her engagements with children and the less-privileged in Zimbabwe, said: “My heart bled when it was announced that Tanya had failed to be present as she could not travel to Ghana due to financial constraints.”

Dube said when she learnt that Muzinda had failed to raise the ticket to Accra, she felt challenged as a philanthropist, as it was her duty to assist children with vision and make them realise their talents.

“I had to receive the award on her behalf and I have already taken a decision to make sure that I assist Tanya in all her sporting endeavours. She (Tanya) is a role model to the girl child and there is need to nurture such talent,” the philanthropist said.

Part of the letter dated July 2019 by the organisers of the awards to Muzinda read: “The awards category is for the bravest and most daring, as well as the most strategically sound and forward-looking child with measurable achievement in sport.

“The conferment is based on recommendation of your exceptional demonstration of excellence in sport with numerous record-breaking feats like the first female to win a Moto since its inception, the first female to become a motocross champion in Zimbabwe since it started in 1957, among other achievements. This has set you as a role model, setting the pace for other children to follow.”