Source: President puts foot down on illegal settlements | The Herald

GOVERNMENT is taking drastic measures to redress the illegal construction of houses on wetlands in most urban areas without requisite infrastructure and will offer alternative spaces for desperate home seekers who have been given a raw deal by urban councils.

In his address to the nation yesterday the President slated urban councils, that are mostly run by opposition parties, for failing the nation as they have been illegally parcelling stands to home-seekers without providing facilities such as water, roads and sewage reticulation systems.

Towards national development President Mnangagwa said Government will continue along the path of balanced national budgeting and a balanced economy which will see all areas of the economy being given attention, through the policies of equalisation and devolution which have thus far led to the transformation of the social and infrastructure in both rural and urban areas.

“Government is however deeply concerned with the illegal expansive construction in wetlands and river basins as well as the construction of houses without the provision of requisite infrastructure such as roads, water, sewer and electricity. The current excellent rains received across the country have exposed and laid bare the extent of associated problems in unplanned settlements in our urban, peri-urban and growth points.

“Henceforth, relevant ministries are being constituted into working groups that will focus on social service delivery as well as arresting the negative impact of the chaotic, unplanned illegal settlements in growth points, towns and cities.

“Meanwhile, alternative spaces have to be urgently identified and developed for relocation of families with houses built in wetlands and other undesignated areas. The Ministry of Housing and Social Amenities, along with other ministries, departments and agencies must immediately identify such areas and ascertain the quantum of affected households.” 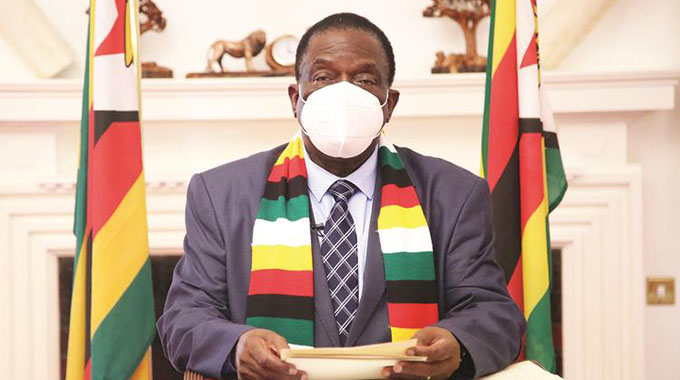 He added that the Environmental Management Authority (EMA), should identify and designate all wetlands around the country as unsuitable spaces for human settlement.

“Going forward, boundaries marking rural and urban land must be enforced or redrawn according to relevant laws.

“The redress of this undesirable and worrisome situation is being urgently and decisively undertaken across all local authorities. The current urban local authorities have all failed us,” said the President.

Meanwhile the President said the Government is ready to strengthen confidence among investors to increase trade and facilitate the flow of exports which will ultimately benefit Zimbabwe, in a society that shuns corruption, criminality and delinquency.

“On the international relations front; Zimbabwe is committed to remain a good neighbour to all and making a positive contribution in the community of nations, for a better world.

“In the spirit of multilateralism and guided by the ideals of the United Nations Charter; we will esteem and extend mutual respect to all nations. Our country in-turn expects the same from other members of the global community, as we together advance sustainable economic growth and a more peaceful world,” he said.