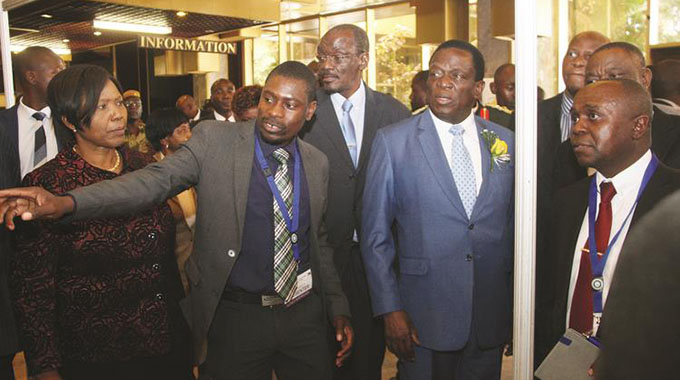 Elita Chikwati Senior Reporter
President Mnangagwa has assured local and foreign investors that his administration will protect their rights by making conditions conducive for investment.

He made the pledge yesterday in Harare while officially opening a Water Infrastructure Investment Conference where he also launched the National Climate Policy and Climate Smart Agriculture Manual for Agriculture Education in Zimbabwe.

The conference was meant to mobilise funding for the development of over 30 water infrastructure projects that on completion will bring water storage capacity to over 70 billion cubic metres.

The projects showcased during the conference were given National Project Status.

This will ensure the economy remains competitive in line with the SADC Industrialisation Strategy.

Hosted by the Ministry of Environment, Water and Climate, the conference was attended by Vice Presidents Constantino Chiwenga and Kembo Mohadi, Minister of State for Harare Cde Miriam Chikukwa, ministers, members of the diplomatic corps, senior Government officials, captains of industry and prospective investors.

President Mnangagwa said Zimbabwe had other areas of investment beyond water infrastructure development, ranging from mining, tourism, roads infrastructure, agriculture to energy, and was willing to partner with investors.

“We are ready to embrace investors as we seek to improve our status as a player in the regional, continental and international socio-economic affairs,” he said. “As Government, we are committed to honour the rights of investors, including the protection of their investments at law.

“Under the new political dispensation, we observe and respect the rights of investors and property rights. As Government we are prepared to listen to investor concerns and address them with the aim of producing win-win solutions. This is a commitment we lodge, never to drift from.”

President Mnangagwa said water infrastructure development had been one of the Government’s key priorities since 1980.

He said the advent of climate change gave a sense of urgency to the need to invest in the development of the sector.

“We are aware that the limited water infrastructure inhibits the investments of productive capital, raises production costs and leads to the loss of production time due to water shortages, resulting in high prices of finished goods,” said President Mnangagwa.

“Limited water infrastructure is, therefore, a major threat to any envisaged economic growth and competitiveness. To this end, investment in the water sector has become more imperative now than ever before. Water infrastructure development is part of our broader response to climate change.”

He said there was need for urgent mitigation and adaption initiatives to address the effects of the global climate change phenomenon.

“This investment conference will undoubtedly go a long way towards harnessing both domestic and foreign direct investment into water infrastructure development in our quest to address multi-faceted challenges and needs in the water sector,” said President Mnangagwa.

“I am optimistic that the conference will stimulate funding for water infrastructure projects and proffer insights into how the country could mitigate the impact of climate change through the building of water storage capacities and devising strategies for the efficient utilisation of available water bodies.

“I am pleased that we are also launching the National Climate Policy which spells out how we can plan to mitigate the effects of climatic change on our environment, human, animal and plant life.

“My Government under its agriculture programmes needs at least 350 000 hectares of arable land under irrigation. To achieve this, we need adequate water bodies throughout the country which will assure national food security, as well as beneficiation and export of surplus produce.

“Investment in water infrastructure will hasten the modernisation of our agriculture and complement our renewed mechanisation drive; facilitate the development of our aquaculture under Command Fisheries, Livestock and general cropping programmes as we seek to increase productivity.”

President Mnangagwa said adequate water supply would enable the country to establish greenbelts in the provinces and establishment of agriculture-based Special Economic Zones.

“To this end, Government urges that water infrastructure development must be seen within the context of the broader economic vision of our country,” he said.

“Furthermore, the need for safe and clean water cannot be overemphasised as lives have been lost to water-borne diseases and economic opportunities restricted due to limited water infrastructure.”

President Mnangagwa said women and children were the most affected by water shortages as they ended up walking long distances in search of the com- modity.

“In urban areas, the growing population continues to exert pressure on the limited water resources infrastructure resulting in some neighbourhoods going for days without water,” he said.

President Mnangagwa said water infrastructure development would assist the country to raise its great vision of becoming a middle-income economy with a capita of $3 500, increased investment, decent jobs, broad-based empowerment, free from poverty and end corruption by 2030.

Environment, Water and Climate Minister Oppah Muchinguri-Kashiri said over the past years, Government had been the principal financier of water infrastructure projects with private players participating as contractors.

She said this hindered and eroded the country’s ability to invest in water infrastructural development.

“For the past 37 years, our country has been on a slow economic trajectory characterised by a myriad of challenges ranging from economic sanctions to international isolation,” she said.

“Government has, therefore, organised this conference and launch the National Climate Policy to attract and mobilise the necessary investment needed for the development of the country’s water resources, as well as to provide broader framework on how the country will build resilience against climate change.”

The conference was held under the theme, “Unlocking Zimbabwe’s Water Resources Potential for Economic Development”.