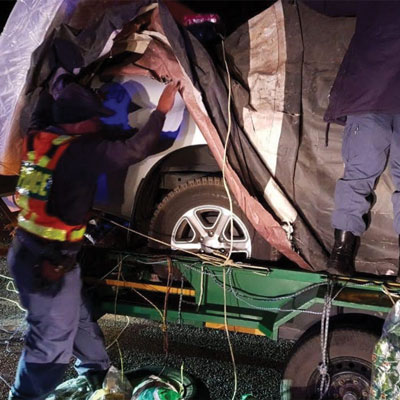 CROSS-BORDER transporters commonly known as omalayitsha have in the last few days been intermittently blocking the Beitbridge Border Post as they demand for a one-stop search point where all border authorities coverage.

Police yesterday described the move as illegal as it ran in the face of government efforts to decongest public places.

“This is not the time that people should be misbehaving. We must now take care because this COVID-19 is real. It no longer requires that police supervise how people should behave, we should be orderly,” national police spokesperson Assistant Commissioner Paul Nyathi said yesterday.

“Everyone at that border should be orderly. Customs and excise, immigration, police, army and traffic gridlocks starting from the border post and spilling across the bridge have been witnessed regularly.”

Cross-border transporters accuse authorities of mounting numerous checkpoints they believe are meant to fleece them through bribes.

“We want all the border officials to search us at one point so that when you offload for these searches, you do it once. As it is, you are stopped by customs and you offload, only to go through the same process when you get to other department officials,” a cross-border transporter, who declined to be named, complained.

As if to undermine other arms of government, police and army units deployed to guard against smuggling and human trafficking have different checkpoints, at times a few metres from each other inside the border.

Even after leaving the border, at times omalayitsha are ordered to drive back to the border post when they get to anti-smuggling roadblocks 80km from the border on either the Beitbridge-Masvingo or Beitbridge-Gwanda highways.

On Sunday night, delays lasted for more than five hours during which even commercial traffic was caught up in the hold up.

Parliament has in the past urged all border officials to operate from a common point to avoid delaying travellers and traders alike.