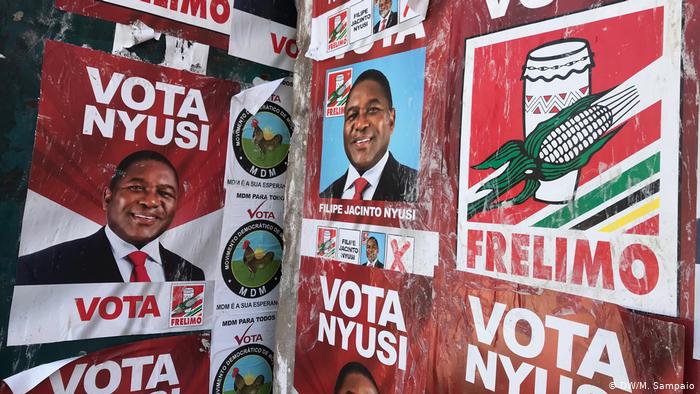 At a Maputo press conference, the Renamo general secretary, Andre Majibire, said there had been open fraud during the elections, often spotted by Renamo monitors at the polling stations. He cited cases where polling stations chairpersons had been surprised in the act of handing “four or more” extra ballot papers to certain voters, and others in which voters themselves had been found in possession of extra ballot papers marked in advance in favour of the ruling Frelimo Party and of the incumbent president, Filipe Nyusi.

Majibire also cited cases in which party monitors who tried to protest at irregularities were thrown out of the polling stations or even arrested.

In cases reported to the authorities, “it’s the whistleblowers who are arrested and not those who committed the crimes”, he said.

“We saw a total violence characterised by the blocking and expulsion of Renamo party monitors and party nominated polling station staff by polling station heads with the help of the police, and the arrest of delegates and voters when they tried to protest against ballot box stuffing,” he declared.

Those expulsions and arrests at the polling stations, he continued, made it impossible to collect the evidence needed when presenting complaints to the district courts.

Maibire compared the electoral fraud to academic fraud in which students are caught smuggling the answer sheets into examination rooms. In such cases, he pointed out, the exams are cancelled.

So Renamo now wanted the results of the Tuesday elections cancelled and new polls organised, “supervised by unbiased bodies”. He did not suggest how such “unbiased bodies” could be set up.

Currently, the electoral administration bodies, the National Elections Commission (CNE) and its executive arm, the Electoral Administration Technical Secretariat (STAE), are top-heavy and inefficient because, at the demand of Renamo, they are stuffed from top to bottom with political appointees.

The last time the electoral law was rewritten, in 2014, it accommodated Renamo demands. As a result, the election commissions and the branches of STAE at national, provincial, district and city levels contain literally thousands of appointees from the three main parties – Frelimo, Renamo and the Mozambique Democratic Movement (MDM) – all looking over each other’s shoulders. In practice, this politicisation merely increased the power of Frelimo within the electoral apparatus.

The election scandal, Majibire accused, showed that Frelimo “does not want peace”. He said that violence at the elections was a breach of the agreement of 6 August between the government and Renamo which states that the two sides “will not practice acts of violence and intimidation for political objectives.”

Majibire did not threaten to tear up the August peace accord. He said the next steps will be decided at a meeting of the Renamo Political Commission scheduled for Monday.

It is thought likely that the Monday meeting will also discuss the future of Renamo leader Ossufo Momade. For, although fraud undoubtedly took place, Renamo’s extremely poor results, currently estimated at between 20 and 25 per cent of the vote, cannot be separated from the divisions within the party following Momade’s election at a Renamo congress in January.

The other significant opposition party, the MDM, has also rejected the election results.