Source: Security forces must be held accountable for the brutal assault on human rights – The Zimbabwean

The Zimbabwean authorities must act swiftly to ensure security forces are held to account for ongoing brutal human rights violations, including torture, rape, beatings and killings of civilians, Amnesty International said today as the crackdown continues against last week’s ‘stay-away’. 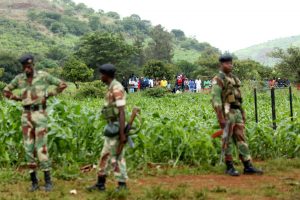 Soldiers patrolled as people gathered in Harare, Zimbabwe, on Tuesday to protest a steep increase in fuel prices.CreditCreditTsvangirayi Mukwazhi/Associated Press

Dozens of civil society leaders, activists, opposition leaders and suspected organizers of the national protests against a massive increase in fuel prices have gone into hiding, fearing for their lives.

At least 12 people have been killed and dozens more injured by the security forces since protests began on 14 January. Up to 700 people, including minors, have been detained after being arrested on trumped-up charges, or brought before courts in hearings that do not meet fair trial standards. Hundreds have been denied bail.

“The onslaught by the security forces in Zimbabwe has seen people killed, arbitrarily arrested, abducted, reportedly raped and jailed on suspicion of taking part in the protests. Children as young as 11 years old have been detained on frivolous charges,” said Deprose Muchena, Amnesty International’s Regional Director for Southern Africa.

“The Zimbabwean authorities must immediately halt their menacing threats towards civil society leaders, activists, opposition leaders and suspected organizers of protests. The authorities must ensure that those who violated and continue to violate human rights face justice.”

Amnesty International has documented a systematic pattern of human rights violations, including restrictions on public assembly, excessive use of force, arbitrary arrests and internet shutdown by the security forces throughout the national stay-away.

The call for people to stay at home and not report for work was prompted by President Emmerson Mnangagwa’s announcement of a 150 percent increase in fuel prices on 12 January. An uneasy calm has since returned to Zimbabwe following days of disruptions to businesses because of the crackdown.

Excessive use of force and arbitrary arrests

The Zimbabwean security forces responded to the protests by deploying the military, the police and intelligence agents. Security forces used excessive and lethal force to disperse protesters with teargas, batons, water cannons and live ammunition.

The crackdown also resulted in mass arbitrary arrests and beatings of protesters. Security forces conducted door-to-door searches and arrested those they suspected of organizing the stay-away.

Between 600 and 700 people, including activists and civil society leaders, have been arbitrarily detained, many of them on trumped-up charges.

Well-known local pastor and activist, Evan Mawarire, was arrested at his home in Harare in the early hours of 16 January. A dozen police officers armed with AK-47s picked him up and he was later charged with inciting public violence. This charge was then amended to subverting a constitutional government. He is being detained at Harare Central Remand Prison after being denied bail on 18 January.

A national internet shutdown was sanctioned by the authorities on 15 January, resulting in an information blackout across the country. Internet access has since been sporadic, affecting many of people who rely on it for financial transactions such as buying basic goods due to the shortage of cash in the country.

Security forces have also targeted the doctors providing much-needed medical treatment to injured people both in hospitals and in prisons, preventing them from doing their work. Three medical doctors, who are members of the Zimbabwe Association of Doctors for Human Rights (ZADHR), were denied access to injured people in police detention and prison. Authorities have accused a local medical NGO, Zimbabwe Association of Doctors for Human Rights, of supporting the protests by treating the injured.

“A Zimbabwe that is prosperous and based on the rule of law will never be built by brutalizing dissent. The authorities must immediately stop this merciless crackdown on activists, civil society leaders and others who are guilty of nothing more than exercising their right to freedom of expression,” said Deprose Muchena.

Amnesty International is calling on the authorities to demonstrate genuine commitment to human rights including by fully respecting, protecting, promoting and fulfilling the rights to freedom of peaceful assembly, association, expression and fair trials.

The organization is also calling on the authorities to respect human rights of everyone, including political opponents, human rights defenders and activists, civil society leaders, journalists and other people with differing views perceived to be critical of the authorities.

“President Mnangagwa has called on all Zimbabweans to come together during this difficult moment. That must include respecting human rights,” said Deprose Muchena.

On 12 January, President Emmerson Mnangagwa announced a fuel price hike, which took effect on 13 January. The prices of both diesel and petrol, required for the transportation of people and consumer goods in Zimbabwe, went up by 150 per cent.

In response, the Zimbabwe Congress of Trade Unions (ZCTU), the largest labour organization in the country, called for a national stay-away, beginning on 14 January.

The authorities responded with a nationwide crackdown to suppress the rights to freedom of peaceful assembly, association and expression.