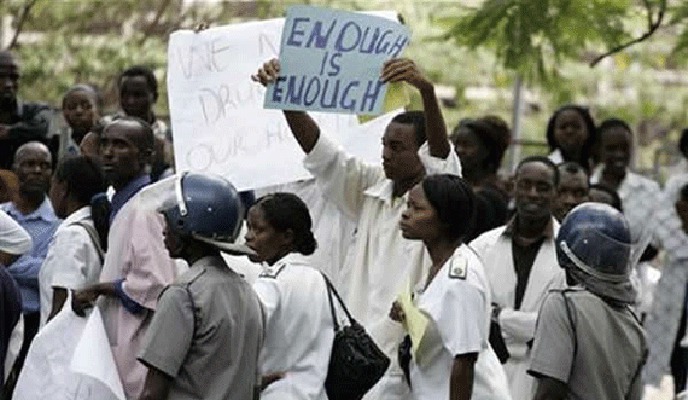 BY VANESSA GONYE
THE Zimbabwe Congress of Trade Unions (ZCTU) has described the sacking of Zimbabwe Professional Nurses Union (ZPNU) president Robert Chiduku as persecution of the nurses.

At least 200 nurses are also currently appearing before provincial disciplinary committees, a move ZCTU says is a violation of workers’ rights.

The nurses are facing charges of partaking in strikes and conducting union activities at their workplaces. This follows strike action by nurses in June this year as they demanded United States-denominated salaries and better working conditions.

ZCTU secretary-general Japhet Moyo told NewsDay that the firing of Chiduku for conducting union business at his workplace was unfair because the Labour Act protects workers and gives them rights to partake in union activities.

“He cannot be penalised for exercising that right. As far as we are concerned, this is pure victimisation as no other employee will be interested in being voted into the same position. It would mean that workers are going to be afraid to lead other workers in trade unionism. It also means that no one will want to be a member of a trade union as they can be dismissed for participating.”

ZPNU secretary-general Douglas Chikobvu said they would appeal against Chiduku’s dismissal within the stipulated seven days.

“We are going to utilise all internal remedies and we are going to make a formal appeal within the stipulated seven days; we are in the process right now. As ZPNU we felt that the ruling was unfair given that Chiduku was just playing his role as a trade unionist.  We also feel that the judgment was too vicious,” Chikobvu said.

Meanwhile, other workers’ bodies have issued messages of solidarity with nurses and Chiduku over their persecution.

The Amalgamated Rural Teachers Union of Zimbabwe (Artuz) said the firing of Chiduku was blatant disregard of domestic and international labour statutes.

“Zimbabwe is a signatory to the International Labour Conventions 87 and 98 on Freedom of Association and protection of Freedoms to Organise and engage in Collective Bargaining. Section 65 of Zimbabwe’s Constitution guarantees and protects the right of workers to self-organise and protest in defence of their interests. The government of Zimbabwe has clearly adopted an anti-worker position in total disregard of the social contract with the citizens of Zimbabwe,” the Artuz statement read.

To stop nurses and doctors from engaging in strikes for a long period, government introduced the Health Services Amendment Bill, of which section 5 of the Bill restricts industrial action by health workers.

Health practitioners have widely condemned the Bill describing it as a weapon to muzzle health workers from airing their grievances.

In 2018 and 2020, health practitioners engaged in strikes that crippled the country’s health sector.