The Catholic Church wants air time in Zimbabwe. But the government is (still) saying no

Zimbabwe’s broadcasting authorities promise to liberalize national media, but those concessions have not been extended to religious broadcasters at Catholic dioceses.

Source: The Catholic Church wants air time in Zimbabwe. But the government is (still) saying no. | America Magazine 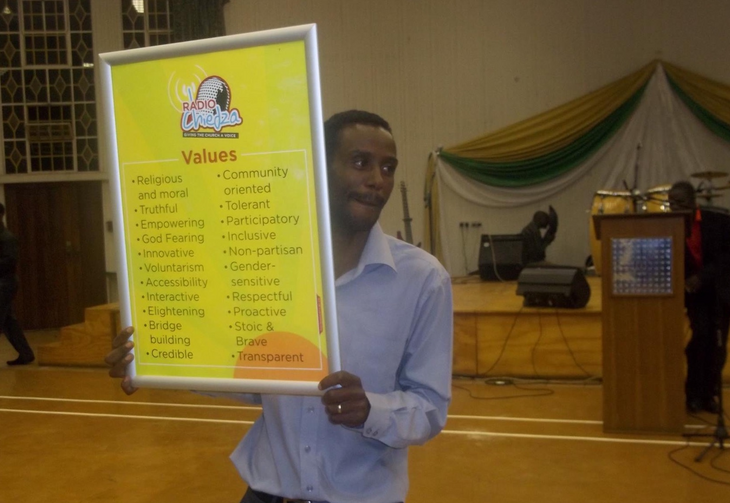 The Catholic Church in Zimbabwe has for years lobbied the government to ease stringent broadcasting laws and reduce steep licensing fees that have denied private players and local voices entry into radio and television media. While Zimbabwe’s broadcasting authorities on numerous occasions made commitments to liberalize national media, those concessions have not been extended to religious broadcasters at Catholic dioceses who say they are ready to broadcast if granted licenses.

Early this year, Zimbabwe’s information and broadcasting services minister, Monica Mutsvangwa, announced that three community radio stations and three university campus stations had been awarded broadcasting licenses, but none were granted to religious or faith-based broadcasters.

In April, the Broadcasting Authority of Zimbabwe announced it was awarding nine more licenses, giving the awardees 18 months to start broadcasting. Once again, no church-based broadcasters were included in the latest list of grantees, even though the Society of Jesus in the capital city of Harare and representatives from other Catholic dioceses have had applications for broadcasting licenses pending now for more than two decades.

Zimbabwe’s broadcasting authorities promise to liberalize national media, but those concessions have not been extended to religious broadcasters at Catholic dioceses.

In Bulawayo, Nigel Johnson, S.J., set up what was then known as Radio Dialogue in 2001. The project had a rocky beginning. Police raided Radio Dialogue offices in 2002, a period when criticism of then-president Robert Mugabe by Archbishop Pius Ncube made international headlines. The project was abandoned after a decade of failed efforts to get a broadcasting license from Zimbabwean authorities when it became impossible to secure new funding.

Despite the apparent intentional inaction on licenses by Zimbabwe officials, efforts to set up a community radio station have not been abandoned, according to the Rev. Elias Nyathi. He leads the Archdiocese of Bulawayo’s social communications apostolate.

“We have been trying for years now to get a license for Catholic Radio, but it has not been easy,” Father Nyathi said. “The archdiocese has willing and ready partners to help us set up a community radio station even tomorrow.” The ongoing Covid-19 crisis has only heightened the need for Catholic broadcasters, Father Nyathi said, as parishioners stay home under lockdown controls but could nonetheless have access to church services through radio.

The Zimbabwe government has long expressed suspicions of independent players entering the broadcasting sector, accusing some of them of planning to broadcast content hostile to the ruling ZANU-PF Party.

“It is an open secret that government has attempted to silence the Catholic Church for years,” said Gerald Mabweazara, a Zimbabwean academic and researcher at the University of Cape Town in South Africa.

“Fears still exist in the regime about the church’s outspokenness,” he said, citing the government’s hostile responses to recent pastoral letters from Zimbabwe’s bishops’ conference.

The Zimbabwe church has turned to other platforms to spread the gospel, but more remains to be done if radio is to make an effective contribution to evangelization.

The Media Institute of Southern Africa–Zimbabwe says that the government has consistently ignored constitutional protections meant to promote a diversity of media actors and has imposed tough conditions for prospective broadcasters. “Given the capital-intensive nature of the industry and the exorbitant licensing fees, the elite with their deep pockets will most likely continue dominating the industry,” MISA–Zimbabwe said in a statement.

“The license fees for commercial television is pegged at $306,000 per annum for the 10-year license period which amounts to more than $3 million for the license-holding period. Additional licensing costs include $170,000 as application fees,” MISA–Zimbabwe noted.

Against these obstacles, church communication initiatives have stalled.

Radio Chiedza—“lamp” in the local Shona language—was launched in 2013 by Harare Archbishop Robert Ndlovu. The community radio station has yet to receive a broadcasting license.

According to Gift Mambipiri, an editor at Jesuit Communications in Harare and past chair of the Zimbabwe Association for Community Radio Stations, while the church continues to push for community radio station licenses, Radio Chiedza has turned to streaming church activities on social media platforms.

“But this model is expensive, as church members must have data packages to access content. The ideal situation would be for the church to have its own radio station on the FM frequency, which will be easier and cheaper for people to get the messages from the church,” Mr. Mambipiri said.

“The ideal situation would be for the church to have its own radio station on the FM frequency, which will be easier and cheaper.”

Last year, Nick Mangwana, the permanent secretary of Zimbabwe’s Information, Publicity and Broadcasting Services, told local media that community radio stations will need money and training before they can expect to receive licenses. Mr. Mangwana and other government officials insist on “professionalism” among broadcast applicants, but activists say that insistence is a ploy to delay issuing licenses. Lobbyists say that community radio stations are ready now with both money and training to begin broadcasting.

The Zimbabwe Association for Community Radio Stations (Zacras) says more needs to be done to liberalize broadcasting in Zimbabwe. “We continue to entreat the government of Zimbabwe to ensure that broadcasting space is diversified in its entirety through the licencing of people-centred and community rooted community radio stations,” Zacras said in a statement released in January.

“What the church needs is to be forthright [about its broadcast capacity and content intentions] when dealing with regulators in terms of why they need a community radio license,” Mr. Mambipiri said, noting the lingering suspicions and hostility of ZANU-PF government officials against the church.

Other actors in church communications are seeking alternative routes around obstacles to Catholic broadcasting. Brother Alfonce Kugwa, the spokesperson of the Zimbabwe Catholic Bishops Conference, said the national church, bereft of a station of its own, invited Radio Maria to operate in Zimbabwe.

Radio Maria is an international Catholic radio service based in Italy. Its efforts in Zimbabwe track back to 2019, but it has not yet managed to get on Zimbabwe’s airwaves.

The Zimbabwe church has also turned to other platforms to spread the gospel, but more remains to be done if radio is to make an effective contribution to evangelization, Brother Kugwa said.

“The church has been using different social media platforms to communicate Covid-19 issues,” like encouraging parishioners to seek out Covid-19 vaccinations, Brother Kugwa said, adding that the church intends “to continue lobbying hard for the government to issue licenses to community radio stations and churches.”

Father Nyathi argues that the Zimbabwe church should not have to be put in the position of appeasing the authorities about intended content in order to receive a radio license but should be focused on articulating a better understanding about the roles of church and state. All the same, he suggested, priests with friendly connections to the ruling party might be able to help secure the coveted licenses.

“We will keep lobbying,” he said. “We want the authorities to understand that our intentions are evangelization and nothing more.”