The results of the inquiry into the 1 August 2018 shootings reveal Zimbabwe’s lack of reform. The commissioners should be hanging their heads in shame. By Derek Matyszak. 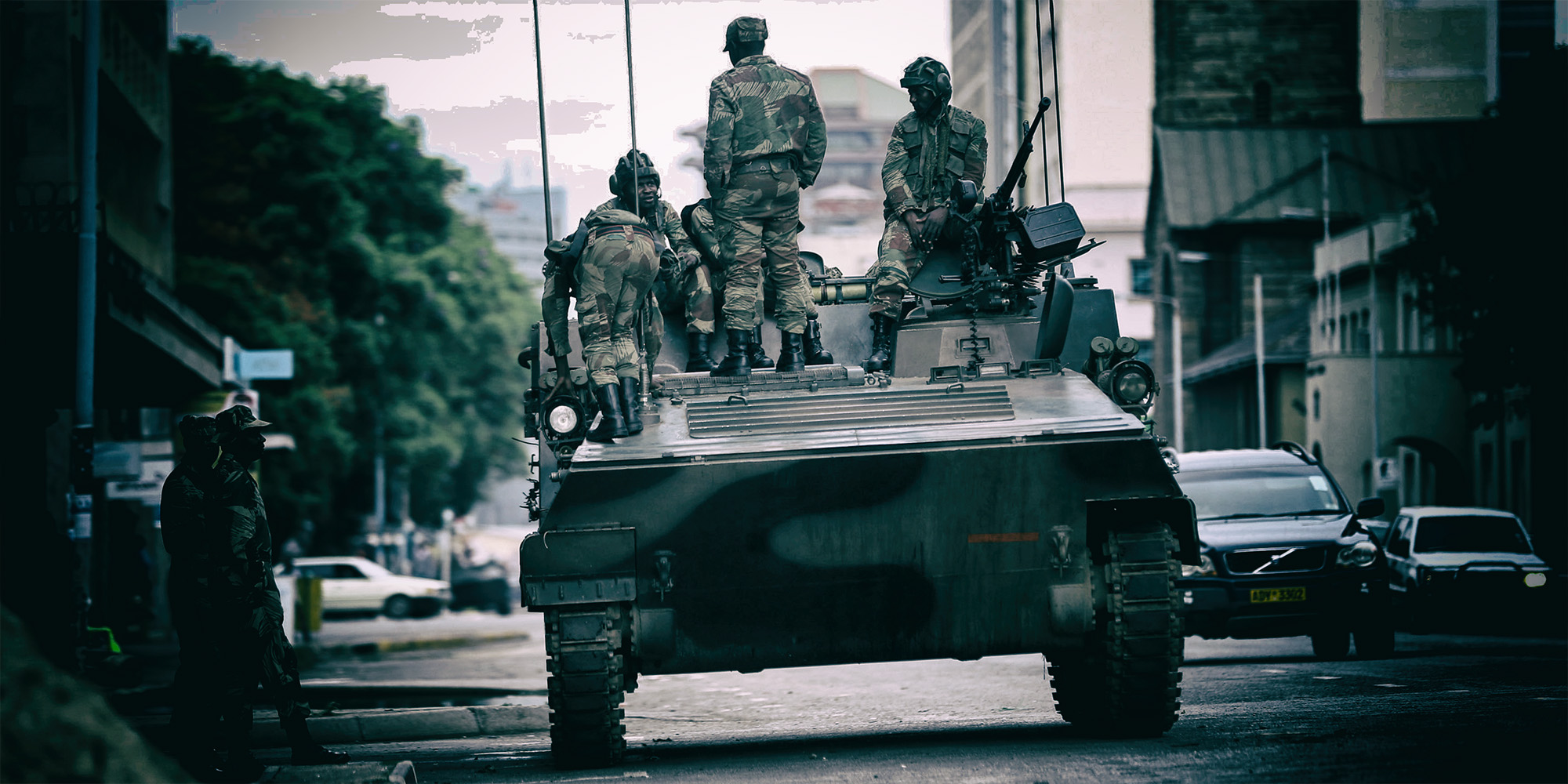 Soldiers stand on and next to an armoured vehicle parked in the central district of Harare, Zimbabwe, 16 November 2017. EPA-EFE/AARON

The results of the inquiry into the 1 August 2018 shootings reveal Zimbabwe’s lack of reform. The commissioners should be hanging their heads in shame. By Derek Matyszak.

A year ago on 1 August 2018, Zimbabwean soldiers killed six civilians on the streets of Harare. The date also marks the moment President Emmerson Mnangagwa’s carefully laid plans started to unravel.

To encourage investment, Mnangagwa had intended to show a commitment to democracy through an election in July 2018 which would pass as halfway respectable. He almost succeeded, until violent protesters took to the streets of Harare demanding the immediate release of the election results.

Under the command of Brigadier-General Anselem Sanyatwe, soldiers were deployed to contain the situation. They did so by firing live ammunition at fleeing and terrified civilians who happened to be in the city centre at the time. When the smoke cleared, the six dead lay in pools of blood before the cameras of the international media who had gathered to report on the polls.

Everyone wanted to know who was to blame for the deployment of armed soldiers against civilians, presenting the administration with a dilemma. If government admitted that this was the decision of defence minister and former Zimbabwe Defence Forces commander Constantino Chiwenga, who had led the November 2017 “coup” that brought Mnangagwa to power, this would be to throw an important ally under the bus.

Under Zimbabwe’s new constitution, the military can only be deployed for public order purposes with the authority of the president. Without such authority, Chiwenga’s decision would have been unlawful. If presidential authority had been given, the blood of the six was on Mnangagwa’s hands.

Mnangagwa remained silent on the question of authorisation, avoiding such awkward questions by moving quickly to establish a commission of inquiry. He appointed seven commissioners who would be required, in part, to investigate his own conduct. To give the commission a veneer of respectability, four of the seven were from outside Zimbabwe.

The commission was headed by former South African president Kgalema Motlanthe. That the commission’s task was damage control was made apparent by the inclusion among the commissioners of well-known Zimbabwe African National Union-Patriotic Front apologist Charity Manyeruke, and by the fact that one of the terms of reference of the commission was to determine what “necessitated” the deployment of soldiers thus foreclosing inquiry into a crucial aspect of the events.

The result was a report tailor-made to Mnangagwa’s requirements. The report commences by contrasting Mnangagwa’s calls for peace before the elections, with what is called ‘overwhelming video evidence’ of Movement for Democratic Change-Alliance (MDC-A) leader Nelson Chamisa inciting violence.

As an example, the report references a video of a rural rally addressed by Chamisa and, presumably, this video was selected as being the most illustrative. Clicking on the link given in the pdf of the report takes one back to the report online and not to the expected video clip.

A video of the entire rally is, however, available on YouTube. Chamisa speaks entirely in Shona, so only the three Zimbabwean commissioners could have understood what he said. Chamisa does not say the words ‘quoted’ in the report or anything even remotely similar.

Other video evidence in this regard referred to by the commissioners is similarly defective. Yet this “evidence” clearly informed the finding by the commission that the MDC-A was responsible for the violent demonstration and that it was pre-planned.

This isn’t the only key finding based on patently fabricated evidence. The commission found that the troops had been deployed in accordance with constitutional requirements. For this, they accepted a paper trail supplied by the government.

This comprised a letter by the district police chief on the ground to the provincial police chief; a letter from the commissioner-general of police to the home affairs minister; and then a letter from the home affairs minister to Chiwenga as the defence minister. These letters all followed the procedure set out in a section of Zimbabwe’s public order legislation – a section rendered void by the later constitutional requirement that presidential authority was necessary.

The government dealt with that problem by adding three more letters: one from Chiwenga to the president seeking the necessary authority; a second from Chiwenga to the commander of the Zimbabwe Defence Forces stating that he had obtained the necessary presidential authority, copied to the home affairs minister; and a third from the latter to the police chief advising of the authorisation. Note the gap in the paper trail at this point.

There is no letter from the president, so we just have Chiwenga’s word for the authorisation, leaving it open to Mnangagwa to deny this if necessary. The troops were deployed at 2.30pm. The request for deployment was made at 1pm. So the commissioners were asked to believe that all six letters were written, printed and hand-delivered in the space of 90 minutes.

That is 15 minutes per letter, with the letters containing citations of the relevant sections of the law and constitution and setting out the events of the morning. Three of the four letters requesting deployment contain the same grammatical error. They were obviously generated ex post facto and, it seems likely, on the advice of the attorney-general.

The recommendations of the commission are no less disingenuous. They include that the perpetrators of crimes on 1 August be prosecuted. In the context of the report, this refers to the demonstrators who destroyed property. And the soldiers who killed people? They are to be regarded as in “breach of discipline”, to be identified by ‘internal military processes’ and “sanctioned”. Even this much has not happened.

Before 1 August 2018, such was the eagerness of the western international community to see an end to the Zimbabwe crisis that it appeared prepared to accept cosmetic changes intended to signal a move towards reform. No more. The United States has ignored the commission’s actual recommendations, and demanded implementation of the report through the criminal prosecution of the soldiers responsible for the killing.

To mark the anniversary, and in the absence of any action by the Government of Zimbabwe, they have slapped a travel ban on Sanyatwe who commanded the soldiers. The commissioners should be marking the anniversary by hanging their heads in shame. DM3

Bogus land developers on the prowl