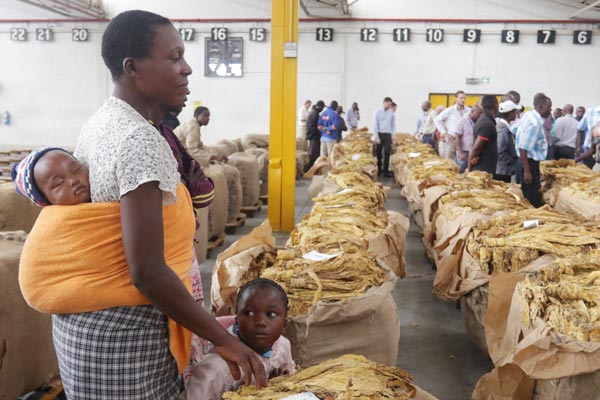 Tobacco farmer Edina Mayanga with her two children waiting anxiously for the pricing of the golden leaf on the first day of tobacco auction at TSF on Wednesday. Picture: Shepherd Tozvireva

Tobacco merchants have suspended purchases of the crop this year, demanding an exemption from paying the 2% tax on intermediate transactions, Standardbusiness has learnt.

According to industry sources only four out of the 32 registered merchants participated in the first two days of tobacco sales, which were punctuated by low participation of growers as well. Growers are also angry with the payment methods and the currency that is being extended for payment.

Boka Auction Floors did not trade for the first two days of the marketing season, while two contracting firms, Mashonaland Tobacco Company (MTC) and Curverid, have pushed forward their opening dates to April 1 until the pressing issues are addressed.

The tobacco marketing season officially started last Wednesday with auction floors opening for trade, while contract floors were expected to commence on Thursday.

Tobacco associations and merchants have since requested audience with the central bank governor seeking resolution of the issues.

“We had a meeting with the Reserve Bank of Zimbabwe (RBZ) yesterday (Thursday) and merchants are saying we are bringing money in USD so why punishing us with this tax. As you know, tobacco is sold in foreign currency but current RBZ exchange control regulations require merchants to liquidate their foreign currency on the market so that they purchase tobacco in RTGS$. The tax is an extra cost to them considering that most of them use borrowed funds to finance the purchase of tobacco and cannot easily negotiate the prices of tobacco with the final offtake so as to absorb the additional cost from the 2 percent intermediate tax,” Bullion Leaf managing director Persistence Gwanyanya said.

“As you have seen, prices so far are not good at all because big merchants are not on the market. The RBZ governor (John Mangudya) said he was going to engage with Finance minister Mthuli Ncube since it was a fiscal issue. ”

Statistics from the Tobacco Industry and Marketing Board show that the highest price which was offered on the auction floors dropped to $4,50/ kg from $4,99/kg last year.

The average price on the first and second day of the sales was $1,83/kg and $1,46/kg, respectively, much lower than the $2,22/kg which was achieved on both days last year.

Trade on the other two floors dipped 97% and 64%, respectively, during the first two days of the buying season as compared to last year with only 59,134kg being traded compared to 684 786kg last year.

Another tobacco associative executive confirmed that merchants were pressing the RBZ for a solution.

“Yes, we met yesterday (Thursday). There will be a new circular released soon covering all the issues of concern raised this week; some resolved, others may need continual engagement during the season, depending on how events unfold. Main issues discussed were RTGS/USD loans separations, with the RBZ to set minimum RTGS loan separation percentages. The RBZ circular will confirm the percentage,” he said.

But insiders say the matter of loans was concluded and it was resolved that contractors be repaid 70% in foreign currency and 30% in RTGS dollars.