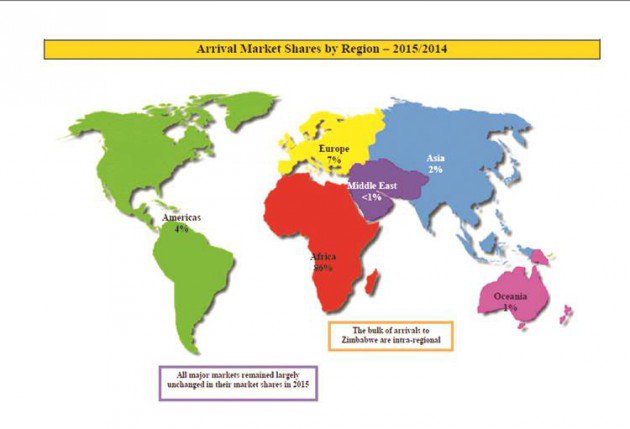 Victoria Ruzvidzo In Focus
Government, global lenders, local and international financial institutions and other economic commentators have put forward varying numbers and rates at which Zimbabwe’s is expected to grow. This is well and dandy as all prediction reflects positive growth.

But the work starts here because real growth will not come by wishful thinking or expression of positive results sentiment, but by real sweat and adoption of sound strategies. All the sectors of the economy will need to give of their best towards the sum total.

It is in this regard that this column will, over the next few weeks, focus on the state, strategy and potential of the individual sectors of the economy.

This week we start with the tourism sector, which is a low hanging fruit.

The tourism sector has immense potential to even supersede agriculture and mining to become Zimbabwe’s largest foreign currency earner for this country although this could sound like a mirage owing to present day circumstances.

This has been the dream since the early 1990s when the Zimbabwe Tourism Development Corporation then, now the Zimbabwe Tourism Authority, pitched to stakeholders that tourism was ready to drive the economy. Of course progress has been made in terms of infrastructure development and arrival and receipts recorded, but the sector is still to realise its potential.

Statistics show that last year tourism registered a four percent growth, with 2,1 million tourists visiting Zimbabwe, injecting $890 million into the economy. This represents about 25 percent of the national budget. The figure is slightly less than this in terms of its contribution to the Gross Domestic Product.

These figures, though progressive, remain a far-cry of what the sector can achieve given higher budgetary support, better infrastructure, an improved country image and increased investment.

The work is already cut out for Government and its private sector partners to transform the sector.

South Africa registered a 39 percent growth in tourist arrivals last year, with about 40 million tourists passing through its various ports of entry, reflecting a 13 percent growth on the 2015 figures. Over the same period, Mauritius achieved a 10,8 percent growth in arrivals to 1,3 million, while in Rwanda tourism is growing by an average 11,7 percent per year, The figure rose from 1,7 percent in 1997 to 11,2 percent between 1997 and 2016.

Africa as a whole has experienced phenomenal growth in tourism, emerging as one of the fastest growing regions.

Last year there were 65,3 million visitors, as the continent benefited from its rich variety of attractions, although such factors as weak infrastructure and security concerns affected performance.

According to reports by the African Development Bank, the continent accounts for 5,8 percent of global arrivals and 3,5 percent of receipts. Global tourism achieved $1,5 trillion in receipts.

The above statistics validate the assumption that tourism has immense potential to spearhead economic transformation and development in Zimbabwe.

The $5 billion sector that Tourism Minister Engineer Walter Mzembi has spoken of is quite achievable. If South Africa achieves $13 billion, Zimbabwe benchmarks itself to achieve at least 30 percent of this, said Minister Mzembi yesterday as he addressed journalists at a media national branding workshop.

He lamented the 0,01 percent budget allocation the his ministry received under the national budget provisions .

“Imagine what we could do if we got even 0,1 percent of the budget. We have a lot of work to do, we should never mess this pillar (tourism),” he said.

Over the past few years, Arrivals from high spending source markets such as the United States of America and the United Kingdom have been on the increase, although those from Asia have declined slightly.

More arrivals from the traditional source markets could be achieved with more targeted programmes and increased accessibility in terms of flights.

Zimbabwe has a lot of advantages that it should leverage on to claim its fair share of arrivals and receipts. For instance, it has a 33-year tourist safety record, a feat not equalled by many, as stated by Minister Mzembi, natural resources and monuments, some of which are yet to be designated as tourist attractions.

Furthermore, the hospitality of Zimbabweans can easily be transformed into hard currency because tourists feel safer and more comfortable in a destination where the local people are warm and receptive. The level of education and ubuntu does make a world of difference to tourists.

Zimbabwe has various tourist resorts, which include the Victoria Falls, Kariba, Great Zimbabwe, Chinhoyi Caves, the eastern Highlands, bush paintings and a number of game parks . These could use better marketing to attract more global interest.

Infrastructure such as roads and transport network also need funds to match or at least be close to competitive standards in this global village.

Furthermore, there is need for revision of high prices for services that tourists continue to moan about. Zimbabwe needs not price itself out of the market.

Above all, efforts need to be rigorous to rebrand the country. The negative Press Zimbabwe has received has kept tourists and investors at bay. Unfortunately, most of the reports are fabrications or hearsay, but we all know that perception is as good as fact.

Zimbabwe has already lost millions if not billions in potential revenue from tourism due to the bad image, and we need to plug this loophole expeditiously.

The Nation Branding initiative the Government has embarked upon should be implemented with all hands on deck to ensure that it achieves results in the shortest possible time.

The Ministry of Tourism and Hospitality Industry was mandated by Government in 2015 to coordinate and drive this programme to transform Zimbabwe into a brand that will compete with others on the global arena.

Indeed for tourism, investment and other such, the plot is lost when a country’s image is battered.

We are replete with examples of how misinformed the world is about this country and this perception will certainly not change unless deliberate efforts are made. Zimbabwe should claim a bigger market share in this region and the world at large.

It is possible to transform the tourism sector over the next few years to help reinvigorate the economy. The opportunities to make it are very high. It calls for dedication, support and team work to turn things around for the sector.

Already the country has eminent ambassadors locally and in the Diaspora, who should help disabuse the word of the negative perception on this country, while helping introduce systems and technologies to attain global trends.

Our Airline, Air Zimbabwe is obviously a major stumbling block when it is supposed to be an enabler.

We hope efforts to turn it around will yield much in the not so distant future.