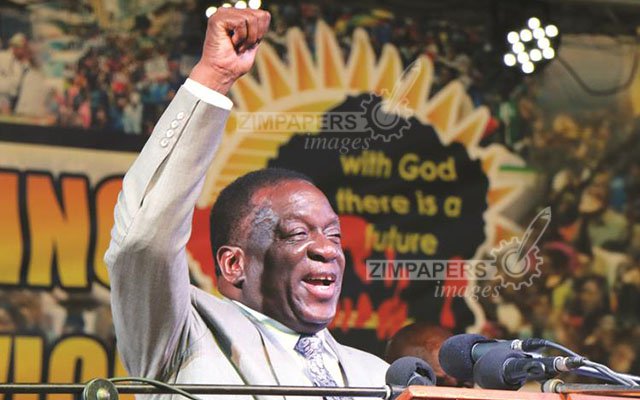 Nduduzo Tshuma Political Editor—
Zimbabweans, including churches, must turn over a new leaf from 2018 and beyond by shunning all forms of corruption in all sectors of society, President Mnangagwa has said. Addressing a National Thanksgiving and Dedication Service at the Zimbabwe International Trade Fair’s Hall 4 in Bulawayo, President Mnangagwa said his administration was committed to rooting out corruption across all socio-economic spectrums.

“The church must be free from all forms of corruption. Let us resolve as a people to be honest and fair in all interactions. In this new dispensation, the culture of corruption and impunity will not be allowed to fester or go unchecked,” he said.

“No more cutting corners, no more breaking of rules, no more using people’s money for personal enrichment. My Government is committed to zero tolerance towards corruption. Both public and private sector officials, at all levels, who engage in corrupt practices will be caught and punished without fear or favour.” The President noted with concern that corruption had spread across all sectors of society, including the church.

“I recognise that corruption is also in our streets, in our schools, hospitals and places of work and sadly also in the church. Our commitment to wipe it out will be applied across all socio-economic spectrums. I equally exhort the justice delivery system to be fair, honest and just in executing their mandate. We must all resolve to turn over a new leaf in 2018 and beyond. There can be no exceptions,” he said.

President Mnangagwa said the Government was concerned with the escalation of child sex offenders, paedophiles and cases of child abuse in general. He called on the church and the general community to exercise their collective responsibility in caring and protecting children in line with the biblical teachings and cultural ethos of Ubuntu/Hunhu.

The President called on the churches to equip youth ministries within their congregations with requisite skills of counseling, rehabilitation and reintegration of children affected by abuse adding that children of all ages should be encouraged to report all forms of sexual and other abuses.

He said upon doing so, punitive measures should be enforced against perpetrators without fear or favour of one’s status or social standing in both church and community. President Mnangagwa reiterated that the church should mould the society’s moral fibre and have to be trailblazers in the transformative agenda of humanity. He also called on the church to be active participants in Government programmes and contribute to the achievement of national goals and targets towards and empowered society and a growing economy.

He cited Command Agriculture and Small and Medium Enterprises development as some of the many government initiatives that the church could take part in. President Mnagwagwa said in both pre- and post-Independent Zimbabwe, the church has been instrumental in preaching the gospel of love, peace and forgiveness.

He said the historical marriage between the church and politics dates back to the liberation struggle and has been strong with many Christian denominations and missionaries being at the forefront in the fight to end colonial injustice and advancing the cause for majority rule. President Mnangagwa said the advancement of the present day’s political, socio-economic development agenda still remains part of the church’s functions and responsibilities. He hailed the Faith for the Nation Campaign, an inter-denominational body, for organising yesterday’s event for, “their patriotism, which has led us to gather to commit our great nation to the hands of our creator on the eve of the New Year.

“The values you represent and those we are here to celebrate are eternal. Prayer, humility, unity and national pride are values that we must always keep at the heart of our communities and our national life,” he said.

“Today, as we reflect and appreciate where we came from, we can resoundingly say God delivers those who trust him. We indeed went through turbulent political, social and economic times as a nation, as families and as individuals, but God has taken us through. All we can collectively say is Ebenezer, thus far the Lord has taken us.” President Mnangagwa called for unity as the country approaches harmonised general elections this year.

“There may be disagreements between us, and this is natural and healthy in any democracy. But, we should never allow our political discourse to turn poisonous. Let us as political parties campaign in peace and seek to convince the electorate that the ideology and the vision they have for Zimbabwe is the best,” he said.

“As voters, we must reward those who seek dialogue and treat opponents with respect, and reject those who preach division, intolerance and politics that seeks to perpetuate the suffering of our people. Above all, let us resolve to remember that we are family, and that what unites us as Zimbabweans is greater than anything that could divide us. We are one people united by our flag, our national anthem and indeed by the blood and love of Jesus Christ.”