UK archbishop puts collar back on after Mugabe’s fall 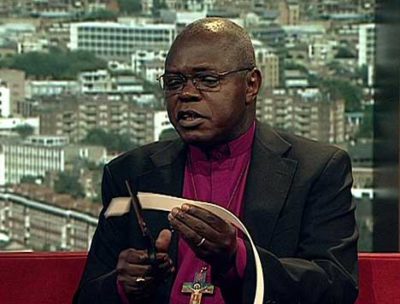 Archbishop John Sentamu cutting up his collar 10 years ago.

London – The Archbishop of York, John Sentamu, put on his white cleric’s collar on Sunday for the first time since cutting it up ten years ago in a highly symbolic protest at Robert Mugabe‘s rule.

The Uganda-born cleric, the second most senior clergyman in the Church of England, made the dramatic gesture on live television in 2007, and stated that he would not wear it again until the Zimbabwe president was gone.After Mugabe left office this week, Sentamu appeared on the same BBC programme where he was handed the pieces of his collar, only to pull a new one out of his pocket and put it on.

“I think the lesson for Zimbabwe is the same. They just can’t try and stitch it up. Something more radical, something new has to happen in terms of the rule of law, allowing people to get jobs,” he told the Andrew Marr show.

He added: “I promised when Mugabe goes I (would) put my collar on, so I have no choice but to put it back on. And Mugabe has gone but the new president has to remember something more new than simply stitching up a thing will work.”

Sentamu said Zimbabwe needed a kind of truth and reconciliation commission like that seen in South Africa – and said Mugabe should ask for forgiveness.

“Mugabe at some point needs to say, ‘people of Zimbabwe, 37 years (ago) I took on a country that was fantastic, I nearly took it to ruin. Zimbabweans forgive me’,” he said.

Many Zimbabweans have celebrated Mugabe’s departure but fear new President Emmerson Mnangagwa – until recently one of Mugabe’s closest allies – could also lead an authoritarian regime.

Sentamu said: “It is quite possible that Emmerson Mnangagwa could actually be a very, very good president. But he can’t simply bury the past. It won’t go away.”

The 68-year-old became the Church of England’s first black archbishop when he was enthroned in November 2005.

On the BBC show ten years ago, he held up his collar, saying it was what he wore to identify himself as a clergyman.

“You know what Mugabe has done? He’s taken people’s identity, and literally, if you don’t mind, cut it to pieces, and in the end there’s nothing,” he said, snipping it into bits with scissors. – News 24/AFP