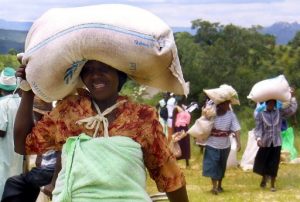 The agency is increasing the number of Zimbabweans it helps to more than 4 million. More than 7 million are in need, about half the population.

A U.N. expert on the right to food has said Zimbabwe has shockingly high hunger levels for a country not at war.

WFP says it needs $293 million and 30% has been raised and that cash is needed now to make timely deliveries.

A drought and soaring inflation have worsened Zimbabwe’s most severe economic crisis in a decade.