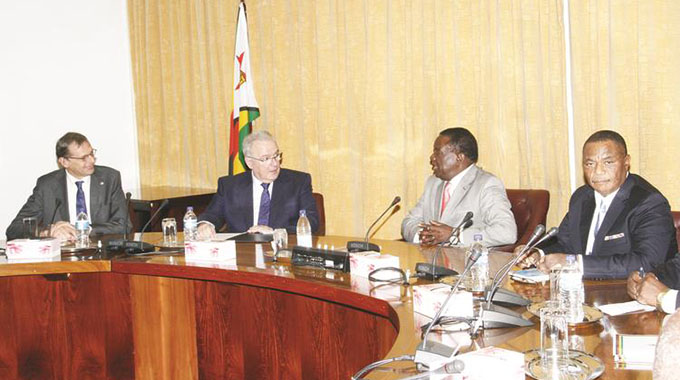 Farirai Machivenyika Senior Reporter
The European Union is ready to work with the new Zimbabwe Government in formulating policies that will enable it to turn around the country’s economic fortunes.

Mr Mimica is the first high- ranking EU official to visit Zimbabwe since 2009.

“We discussed at the highest political level after 2009 but this demonstrates that EU would like to be a reliable partner of Zimbabwe in the process of (this) historic political, democratic transition,” Mr Mimica said.

“This is a process that the EU would like to engage on, to support and to accompany Zimbabwe’s authorities. We discussed it with the President and we agreed that this process should start first with fair and free elections in order to legitimise the whole reform processes in front of Zimbabwe,” said Mr Mimica. 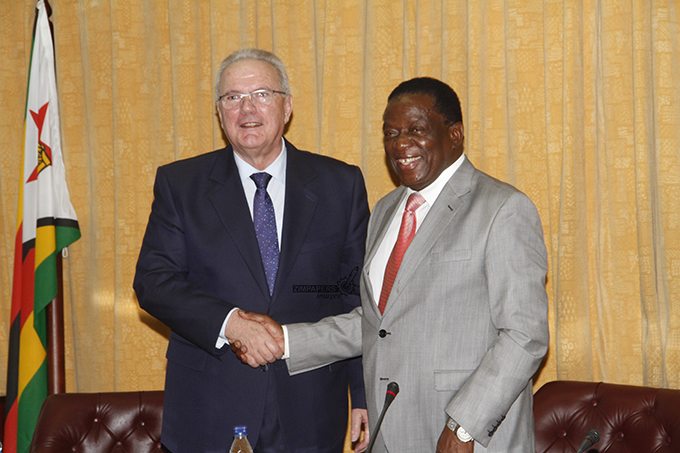 “We look positively to the period in front of us and we would like to support Zimbabwe along the lines of the reforms that would actually open space for a new Zimbabwe, democratic and prosperous Zimbabwe in the future.”

Acting Information, Media and Broadcasting Services Minister, Simon Khaya Moyo said the meeting was productive as the EU had shown willingness to re-engage with Zimbabwe.

“The discussions were very productive. It is quite clear the EU is aware that the new dispensation is very serious about the matters of re-engagement and certainly the trips which His Excellency has undertaken to the Sadc region, the AU, to Abidjan and recently to the People’s Republic of China are clear indications that Zimbabwe is open for business at all levels,” Minister Khaya Moyo said.

“I can assure you that the discussions centred on a number of political, economic and other relations between us and the EU and in the end it was clear that the EU delegation is impressed by what is happening in the country and what efforts the new Government is making,” he said.

“They will be sending another delegation later on; obviously this would be to focus on specific areas in terms of economic cooperation,” he said.

He said President Mnangagwa had explained events leading to the launch of Operation Restore Legacy that ushered in the new Government.

“The President took the opportunity to explain the entire situation right from the day Operation Restore Legacy came into focus and the transitional measures which have been undertaken since then. The entire delegation was very impressed by what is happening in the country.

“We also touched on the coming elections and the President was very clear that these are going to be credible. We want to have elections which are free and fair and the delegation was invited to meet anybody they wish to meet in the country because we have nothing to hide.”