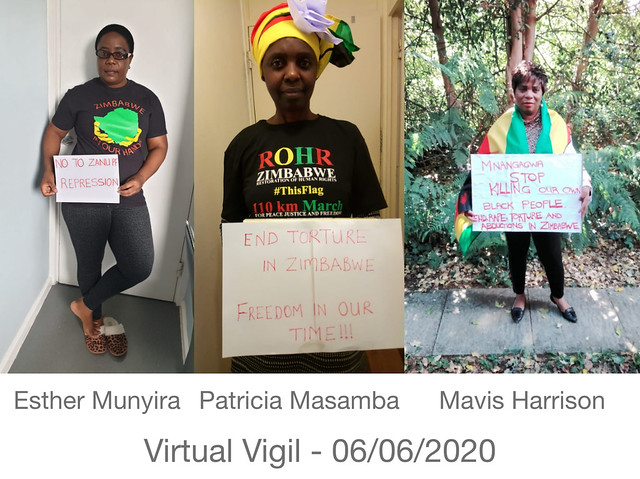 Home Affairs Minister Kazembe Kazembe says the abduction and torture of three young opposition women blamed on government agents didn’t happen. It was all an invention by the MDC, western embassies, churches, doctors and lawyers.

The minister maintained that the government ‘does not permit any of its institutions and agencies to use torture, forced disappearance or abductions’. Such methods, he said, were ‘extrapolated from foreign environments for the benefit of regime change sponsors’.

Kazembe alleged that the chairman of the Zimbabwe Association of Doctors for Human Rights, Fortune Nyamande, and his secretary, Norman Matara, were not resident in the country but had come back specifically to ‘fake’ the abduction. He said there had been consistent contamination of the entire chain of evidence by MDC leaders, activists and officials of foreign embassies who had gained access ahead of the investigating authorities.

Kazembe said examination of the women by government doctors had not shown any injuries matching the women’s accounts which, he said, showed ‘signs of coaching’. He claimed that before they were taken to hospital they went to MDC leader Chamisa’s private offices, adding: ‘the famed abduction was a desperate attempt to qualify for a US 10-month scholarship’.

His allegations were dismissed by the MDC’s deputy spokesman, Clifford Hlatshwayo, who said: ‘Zanu PF is behaving like a terrorist organisation. They are very cruel and think people are objects they can abuse, torture and rape. We are all God’s people and time will come when all this will end. The time is now.’ (See: https://www.newsday.co.zw/2020/06/chamisa-diplomats-stage-managed-abductions-govt/).

Kazembe’s remarks came after a week of bruising exchanges between the Zanu PF government and the United States over the killing of an Afro-American by police in Minneapolis. The American ambassador, Brian Nichols (himself black), pointed out in a statement after meeting Foreign Minister Moyo that the policeman had already been charged with murder but people were wondering when abducted Zimbabweans would get justice.

‘I again urged Zimbabwe’s government to end state-sponsored violence against peaceful protesters, civil society, labour leaders and members of the opposition in Zimbabwe, and to hold accountable those responsible for human rights abuses . . . Peaceful protesters Joana Mamombe, Cecilia Chimbiri and Netsai Marova were arrested, abducted, assaulted and left for dead. To those who deny America’s right to speak out on their fate, let me remind you, “Injustice anywhere is a threat to justice everywhere . . . Whatever affects one directly, affects us all indirectly.”’  (See: https://twitter.com/usembassyharare/status/1267450903512129536).