ACTING President Dr Constantino Chiwenga has called for violence-free by-elections, saying the ruling Zanu PF has nothing to do with the cancellation of opposition rallies by police.

Addressing thousands of ZANU PF supporters at Dangamvura Ground at a star rally to drum up support for the party’s candidates for the Chikanga/Dangamvura and Mutasa South parliamentary as well as local authority by-elections yesterday, VP Chiwenga said peace should prevail during the by-elections.

“Leaders should unite people and not sow seeds of divisions. We have strength in unity. Peace should prevail during the by-elections. We say no to violence because we are all Zimbabweans regardless of our different political affiliation.

“The forthcoming by-elections should show the world that we are peace-loving people. Some people advocate for violence, but we are saying no to it. If you are defeated, you should not blame anyone because you would have failed to deliver on the promises you would have made to the electorate,” said VP Chiwenga.

Answering questions from journalists after his keynote address, VP Chiwenga distanced the ruling party and Government from the cancellation of some opposition parties’ rallies.

“We have nothing to do with the cancellation of opposition rallies. Parties are free to campaign and the police act independently in sanctioning these rallies,” said VP Chiwenga.

His comments follow complains by the opposition Citizens Coalition for Change, accusing law enforcement agents, Government and ZANU PF for working together to cancel their rallies.

VP Chiwenga called on the ruling party supporters to come out in numbers and ensure a resounding victory for ZANU PF. 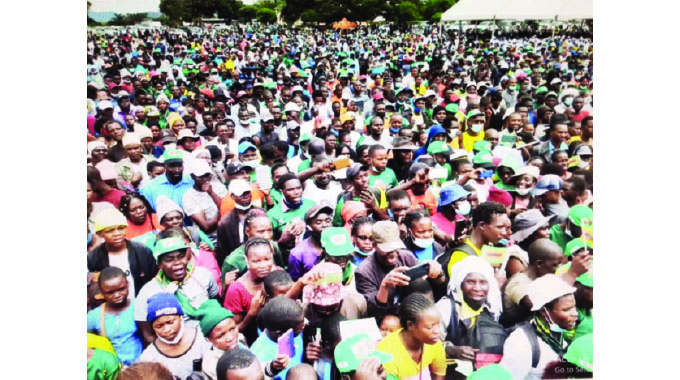 Part of the crowd at the Zanu PF presidential star rally in Dangamvura, Mutare yesterday.

“We should come out in our numbers and vote for the party’s candidates to ensure development in our cities and lives. Most cities have suffered from neglect under the opposition and it is high time we rectify this mistake by voting for a party with a track record of success since from the days of the liberation struggle.

“Service delivery is almost non-existent in all urban areas and we want this rectified. This is done through voting overwhelmingly for ZANU PF. The party does not select anyone or places in terms of development. Infrastructure development is for everyone. We are building to ensure the development of the country,” said VP Chiwenga.

He called on Zimbabweans to put their shoulders to the wheels to ensure that Vision 2030 of having an upper middle class economy is achieved.

“The ZANU PF-led Government has unveiled a lot of economic emancipation programmes for the betterment of Zimbabweans. We are working towards the attainment of Vision 2030 to have an upper middle class economy. We want to eradicate poverty, but we should all work hard to attain this vision. No manna will come from heaven, we have to work hard to ensure that the country prospers,” he said.

VP Chiwenga said although the current 2021/22 farming season is not looking good, the Government is already working on modalities to mitigate against hunger.

“We are not going to have a good season this year, but no one will die of hunger. Government is already working on modalities to ensure that food is availed to everyone.

“We are a Government which walks its talk, and be rest assured that food will be available to everyone,” said VP Chiwenga.

On employment creation, VP Chiwenga said Government is working on a number of projects, while some closed companies like Ziscosteel are now being resuscitated.

“We want to ensure that companies are revived. We are among the leaders in resources per capita in Africa and we should leverage on those resources to improve people’s lives. We should increase our exports so that we generate more forex to ensure economic development,” he said.

“The opposition has proved to be failures as our cities are in shambles. Let us ensure that we have control of the urban areas to ensure that Zimbabweans lead comfortable lives,” said Cde Muchinguri Kashiri.

“The recently held provincial and primary elections saw contestation taking place among cadres, but we managed to sit down and iron out all differences and ensure that people work together. Those who were feuding during the provincial and primary elections have managed to find each other and are working together for the good of the party,” said Cde Chinamasa.