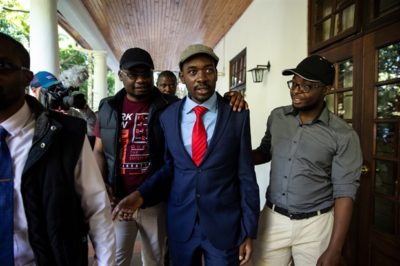 He thanks journalists for the coverage

15:28 ShareIcon
Chamisa: if you go around country there is no celebration. Today is a day of morning of a repeat of what we have seen in the past
15:27 ShareIcon
Chamisa: Many of our people had been visited and interrogated for abiding in an election. The thank you we have been getting for taking part in election as law abiding citizens is a thank you of bullets, tanks, guns
15:26 ShareIcon
Nelson Chamisa addressing journalists during a press conference in Harare. – Carien du Plessis

15:25 ShareIcon
Chamisa: This is the behaviour of people who lost and not won an election
15:24 ShareIcon
Chamisa greets journalists and calls this a turning point press conference. If police can do this with press conference, what more with ordinary people, he says. – Carien du Plessis
15:23 ShareIcon
Zimbabwe’s president says the scenes of riot police dispersing journalists waiting for an opposition briefing “have no place in our society.

15:23 ShareIcon
Zimbabwean riot police with batons and shields are now leaving after breaking up a press conference by opposition leader Nelson Chamisa, who has alleged rigging of the presidential election.

Police chased away reporters without explanation but ruling party officials are now urging reporters to attend the briefing. There is no sign of Chamisa. – AP

15:22 ShareIcon
MDC opposition leader Nelson Chamisa arrives at the Bronte Hotel in Harare for a press conference minutes after he was broken up by several dozen riot police armed with tear gas cannisters, as Zimbabwe’s opposition rejected today what it said were the “fake” results of landmark elections.