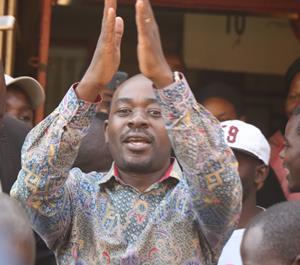 (c) THE ruling party Zanu PF’s manifesto and promises to turn around the
economy have lost wheels and been overtaken by events as the economy
deteriorates.

Following the disputed 2018 harmonised elections won by President Emmerson
Mnangagwa, the manifestoes of opposition parties have also been overtaken
by events and put on the shelf, while waiting for the next opportunity to
re-dust them.
The main alternative governing party, Nelson Chamisa-led MDC has restocked
its arsenal of proposals on how to take the country out of the current
miasma by launching the Road to Economic Recovery, Legitimacy, Openness
and Democracy (RELOAD) roadmap.

The MDC faces a genuine dilemma on how to pile political pressure on the
government in order to lead to the next stage of the roadmap, which is
real national political dialogue, mainly because of the recent brutal
responses by the regime to civilian protests, which violence was
subsequently, mischievously and cynically blamed on the opposition,
ordinary people and civil society.
No doubt that all of the ruling party Zanu PF’s proposals and mantras of
how to build consensus in the country and turn around the economy, like
“New Dispensation”, “Open for Business” and “Transitional Stabilisation
Programme” are increasingly losing gravitas.

Following the disputed 2018 elections and subsequent legitimacy questions,
Mnangagwa inaugurated the Political Actors Dialogue (Polad) and
constituted the Presidential Advisory Council (PAC) to save his
credibility.

From the outset, the Polad whose agenda was not clear and which looked
like a project of political co-optation and containment rather than
genuine political engagement of the opposition parties faltered.

The main parliamentary opposition, MDC boycotted on the basis that
Mnangagwa could not impartially host the envisaged dialogue, whose agenda
could involve the political illegitimacy question, because he was an
interested party.

Furthermore, Polad exhibited the historical problem that political
dialogues in Zimbabwe have left out civil society and business, making
them Faustian bargains without broader buy-in, which are narrowly meant to
address power concerns among political gladiators rather than reviving the
social contract in a far-reaching way.

As a result more than two months after the launch of Polad and many
meetings, the fundamental problematic political and socio-economic
questions in the country have not been resolved, if anything, they are
getting worse.

Thus, the continued insistence and posturing by the ruling party
establishment that it is committed to national dialogue remains a charade
and disingenuous.

There have been concerns about how the PAC has been constituted with some
analysts suggesting that the body is populated by people with conflict of
interest in their business dealings to properly advise the president.

Thus the Zanu PF economic turnaround plans having been overtaken by the
rapidly deteriorating economic situation, the POLAD failing to kick-start
meaningful dialogue and the PAC facing questions about its credibility,
the Mnangagwa-led government is left with no credible proposition in place
to inclusively take the country forward and arrest the economic decline
and its fast-paced assault on people’s livelihoods.

The MDC’s RELOAD, while facing the problem of implementation in terms of
how to exert political pressure on the regime, furnishes the political
field with a roadmap to recovery worth considering in the absence of the
same from the ruling party.

Given that the opposition has made a proposition, it would be only logical
for Mnangagwa and Zanu PF to present to the country a credible roadmap
towards solving the current problems, taking into account what the MDC has
proposed in terms of political dialogue, instead of continuing with the
sterile and stiff politics of “regime survival.”

The country needs a genuine multi-stakeholder political dialogue and a
transitional mechanism to implement an agreed reform agenda with the
scaffolding of the international community. By continuing to grandstand
that things are working in Zimbabwe, Zanu PF exhibits either a contempt of
the people’s plight, or complete lack of touch with reality.