Herald Reporters
Zimbabwe is committed to political reforms to open up democratic space in the Second Republic, while the process to replace the Access to Information and Protection of Privacy Act (AIPPA) and Public Order and Security Act (POSA) is expected to be complete by August, the President has said.

Speaking to journalists last night on arrival from Mozambique where he attended the 12th US-Africa Business Summit, President Mnangagwa said he had fruitful discussions with US Assistant Secretary (Bureau of African Affairs) at the US State Department, Mr Tibor Nagy, during which he allayed fears of possible delays in the repealing of AIPPA and POSA.

“There was also a delegation that came that was led by the State Ambassador Tibor Nagy of America. They raised their concerns; we also raised our concern. They worried about the delay of the repeal of AIPPA and POSA, but we have told them that those pieces of legislation are already in Parliament and are progressing very well. We believe that before August those Bills will go through.” 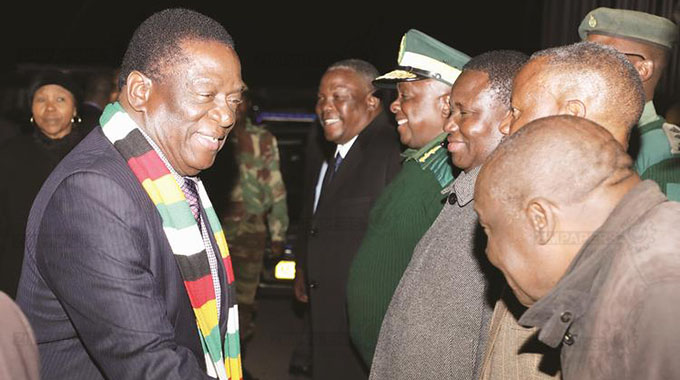 The Freedom of Information Bill will repeal AIPPA, while the Maintenance of Peace and Order Bill will replace POSA.
Yesterday morning, the President met officials from US industrial behemoth General Electric (GE), who have since expressed a strong commitment to supply medical equipment for the country’s major hospitals, including technology for electricity generating units at Hwange Power Station.

GE and China Power recently launched a joint bid for a contract to construct the 2 400-megawatt Batoka Gorge hydropower plant, which is being pursued by Zimbabwe and Zambia.

Government is leveraging on the US-Africa Business Summit, which ends today, to step up its re-engagement drive with private companies and multilateral stakeholders.

Ageing equipment at the thermal power plant is currently affecting output, which has worsened the country’s energy security situation.

Speaking after the meeting, Finance and Economic Development Minister Professor Mthuli Ncuce said the US$120 billion-valued multinational conglomerate “is very serious about investing in Zimbabwe”.

“As you know, General Electric is a massive global company; US-based, and we have discussed different things. First of all, it was their involvement in infrastructure investment as an equipment supplier — technology supplier — this is around Hwange (Units) 1 and 4, but also around their involvement with Batoka Gorge,” said Prof Ncube.

The parties also explored possible exploration of methane gas deposits that have remained largely unexploited, particularly in the western parts of the country.

GE, which was represented by Mr Farid Fezoua, who is the chief executive officer of the African unit, reportedly welcomed Government proposals.

Prof Ncube said: “But also we discussed the gas sector because they have a strong oil and gas division. We discussed about whether they could be involved in the exploration of gas in Zimbabwe as well. We have got methane gas deposits in the western parts of the country.

“So it was quite wide-ranging and they seemed to be welcoming every proposal that we put to them, and we will continue to explore the relationship with them, but they are very serious about being active in Zimbabwe.”

It is believed that growing business relations between US and China might make the 18-year embargo – which impede trade – untenable.

The Zimbabwean delegation sought to maximise opportunities presented by the ongoing business summit to court investors from across the world.

The four-day event is jointly hosted by Mozambique and Corporate Council on Africa (CCA).
CCA is a Washington-based business association that promotes business and investment opportunities between the US and Africa.

More than 1 000 high-level business executives are taking part in the event.
Most importantly, the summit provides participants with the opportunity to scout for investments in multiple sectors such as agribusiness, energy, health, infrastructure, ICT and finance, among others.

In addition to providing scope to network with key private sector and government decision-makers, the summit is also a platform to advocate for effective US trade and investment policies.