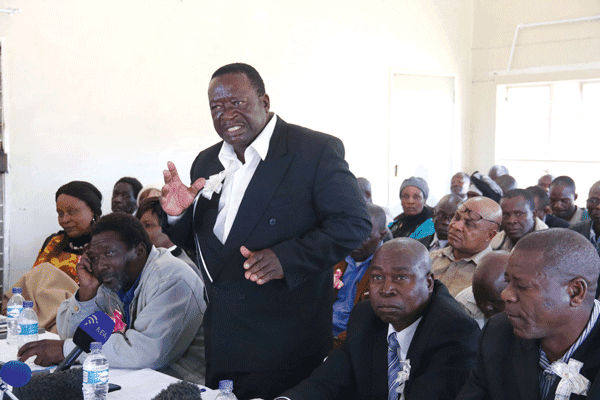 AS much as we would want to always support our fellow country folk who sacrificed their life and limb fighting for the liberation of this country, we sometimes find it difficult to accept some of their demands.

We have also noticed that each time it gets really tough for all other citizens, like it is now, liberation war heroes peel off the rest of us and start demanding preferential treatment.

And government has not disappointed at every turn to act on their demands, even if it may result in disastrous consequences such as the 1998 demobilisation exercise that effectively helped plunge the country into an economic crisis whose effect is still being felt today. Along the way they have also been pampered with preferential treatment in resource allocation, including land and agricultural inputs.

Now we here that the war veterans want their own bank and hospital that exclusively cater for them, with the hospital having an option to accept and charge other patients who are not war veterans.

“Women have their own bank, which was established for them, but if you look at the war heroes (who) fought in the liberation struggle they are not well-funded in terms of self-help projects and there is need for financing to be availed so that there can be a war veterans’ bank (from which) they can borrow money for self-help projects,” Defence and War Veterans ministry secretary, Mark Marongwe recently told Parliament.

Currently, there are an estimated more than 20 banking institutions in Zimbabwe from which the country’s over 16 million people, including babies, can chose to open accounts with. There are also another over 190 micro-finance institutions which include the Empowerbank and Women’s Bank, among a host of others that cater for groups or individuals hoping to start their own businesses and projects. And we would have thought that our war veterans are quite eligible to get loans from these institutions. We would also have thought the war veterans, because they are part of us, would be treated together with us in our hospitals and clinics spread all over the country.

We then become curious, if not somewhat disheartened, when those we thought were part of us start segregating themselves and demanding their own services, especially considering that the liberation struggle was won simply because we were all united as one.

What united us back then was a philosophy that the general masses were the water while the armed guerrilla fighters were the fish. That way the freedom fighters managed to engage the enemy undetected at majority of times. This is what led to the creation of the Zimbabwe nation State.

But now it is sad that the fish no longer want to associate with the water, which is quite tragic. The bigger fish are no longer even being treated here in the country while their banks are all abroad.

We would have thought that because our own hospitals are currently dysfunctional due to a protracted doctors’ and nurses’ strike, our liberation heroes would stand up and demand that the government urgently acts on the catastrophic situation facing our health sector.

Instead, the war veterans seem unaffected by the dying masses who are failing to access proper health services. It is quite sad indeed that our very own brothers and sisters, who we protected with our very own lives during the liberation struggle, have decided to forsake us at this crucial hour.