Why Robert Mugabe scored a landslide victory in Zimbabwean elections

Supporters of Zimbabwe’s president, Robert Mugabe, and Zanu-PF hold a coffin as they act out a fake funeral for Morgan Tsvangirai and his MDC-T party. Photograph: Alexander Joe/AFP/Getty Images

There is a phenomenon in African politics called the preponderance of incumbency. Simply put, it maintains that it is difficult to defeat an incumbent president in an election because they control the state institutions, which they can use to retain power. Consequently, only in Zambia, where presidents Kenneth Kaunda and Rupiah Banda lost in the 1991 and 2011 respectively, is there an established record of incumbents losing to an opposition challenger. 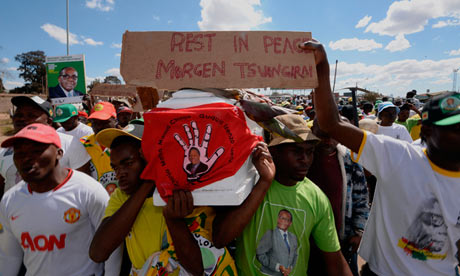 Supporters of Zimbabwe’s president, Robert Mugabe, and Zanu-PF hold a coffin as they act out a fake funeral for Morgan Tsvangirai and his MDC-T party. Photograph: Alexander Joe/AFP/Getty Images

Many analysts have blamed this for Robert Mugabe’s latest victory in Zimbabwe’s presidential election, and his Zanu-PF party securing a two-thirds majority in parliament.

Morgan Tsvangirai, Mugabe’s main challenger and the outgoing prime minister, has described the result “null and void”. Tsvangirai maintains that his crushing election defeat was the result of rigging by the Zimbabwe Electoral Commission (ZEC) and the registrar general’s office, which manages the voters roll.

Tsvangirai and his MDC-T party went into a power-sharing government in 2009 hoping to reform various institutional reforms so as to nullify this preponderance of incumbency in Zimbabwe. Mugabe’s party certainly obstructed and subverted the implementation of such reforms – anything other than this would have been political suicide.

But to say that the preponderance of incumbency continued in the latest election entirely because of Zanu-PF’s obstruction and subversion of reforms would be incomplete. All opinion polls on the likely outcome of the 2013 election demonstrated a rise in Zanu-PF support while that of the MDC-T was shown to be declining.

Tsvangirai’s party lost sight of the need for rapid and comprehensive institutional reforms in the early years of power-sharing. It expended most of its energies in fighting for appointments to the ministry of agriculture, attorney general, the central and provincial governors. By the time it refocused on institutional reforms, the period to elections had shortened significantly. There was little time, energy and external goodwill left for the MDC-T to pursue what should have been its main pursuits from the beginning.

However, the MDC-T from early on sought to reform one particular institution: the military, which it saw as having blocked its ascent to power in the 2008 election. According to Tsvangirai, Zimbabwe underwent a “de facto coup d’état” in 2008 and was now run by “a military junta”, making security sector reform necessary. But the MDC-T’s pursuit of this reform was based on a misunderstanding of the military’s relationship with Zanu-PF. The military does not and never has ruled Zimbabwe; the MDC-T has never presented evidence to the contrary, despite its passionate claims.

Mugabe wields effective control of the military because of his power as commander in chief. Zimbabwe’s liberation history also shapes the relationships of civilian and military elites in a manner that maintains the former’s control over the latter. The MDC-T’s mistaken focus on the perceived lack of civilian authority over the military resulted in it needlessly haranguing and antagonising military generals with no real political power. The MDC-T’s energies and years would have been better spent by trying to eclipse Zanu-PF’s ideological appeal to the military and Mugabe’s authority over the generals.

I followed the election contest closely throughout July and had unique access to some of the individuals involved in the campaigns. The Zanu-PF campaign was run by a network of party officials, youth and retired military officers who fought in Zimbabwe’s liberation war. The party’s commissariat department was an important nerve centre in its campaign and had as its principal directors the retired air vice-marshal Henry Muchena and the former director internal of the Zimbabwean intelligence service Sydney Nyanungo. On one of my visits to Nyanungo, I found him and Muchena making plans for a campaign rally by the vice-president, Joice Mujuru, in Binga. She was going to there to campaign on behalf of Mugabe.

Why did you guys retire to work for the party, what is in it for you, I asked. Nyanungo rolled up the sleeve on his left arm to reveal a deep scar and burn marks, and answered: “I operated the anti-aircraft equipment in the 1977 Rhodesian attack on our Chimoio camp during the liberation war. I almost died during that attack. I cannot allow this country to go to people [the MDC] who do not connect to that liberation legacy. That is why I came back to the party. I am not even paid to do this job. It is my duty.”

There was a greater sense of unity, purpose and discipline in the Zanu-PF campaign than in the MDC-T one. For instance, 29 members of the MDC-T who were disgruntled with the manner the party’s primaries were conducted defied the leadership and ran as independents. Only three disaffected Zanu-PF candidates did likewise. MDC-T divisions were particularly stark in Manicaland province, where imposition of parliamentary candidates by Tsvangirai resulted in a serious rift between him and the provincial executive. Manicaland – unlike in 2008 — voted for Zanu-PF this time.

A largely unstated factor so far in debates about how Zanu-PF won this election is that for the first time in years the MDC-T ran a less effective campaign because of financial constraints. As MDC-T insiders have revealed to me, the party’s traditional western backers were not as forthcoming with financial support as they were in 2008. During the campaigns Tsvangirai publicly criticised the west for giving up on removing Mugabe from power in preference for eventual accommodation with the Zimbabwean president. The west has been unequivocal in its public condemnation of Zanu-PF’s victory but in the coming weeks it must answer hard questions about why it abandoned the MDC-T financially prior the election.

Zimbabwe is largely calm and peaceful in the aftermath of the election. But debate about the result is continuing behind closed doors. I have been part of furious debates among Harare’s middle-class intellectuals. A clear fissure has emerged between those who maintain that Mugabe’s election win is entirely down to the preponderance of incumbency and those who argue that this does not tell the whole story. I’m one of this latter group, who take the view that a multiplicity of factors converged to ensure Mugabe’s election win last week. The challenge in the coming days is for these intellectuals and indeed the MDC-T to produce hard evidence demonstrating that Zanu-PF’s victory is explained by rigging alone.

Even in the MDC-T there is no consensus that rigging was to blame. Some of its senior party officials have quietly sent messages to Zanu-PF conceding defeat and making clear their public pronouncements to the contrary are a means of managing disillusioned supporters. Some of the leadership of the smaller MDC party, which broke away from Tsvangirai’s group in 2005, have even broken ranks. Paul Temba Nyathi, for example, states: “I got a feeling that Gwanda North [my constituency] was unwinnable. People who used to come to our rallies and support us suddenly could not look me in the eye. They started vacillating. We had a free and fair contest, everyone was free to canvass and the vote was peaceful in Gwanda North. Hand on heart, I think Zanu-PF beat us fair and square. There is something that made people to fall in love with Zanu-PF again.”

• Blessing-Miles Tendi teaches African politics in the University of Oxford’s Department for International Development and is the author ofMaking History in Mugabe’s Zimbabwe: Politics, Intellectuals and the Media

Newer Post
In the wake of a shamelessly stolen election: what can we do?
Older Post
Zimbabwe Stock Exchange Plunges 11% After Mugabe Victory