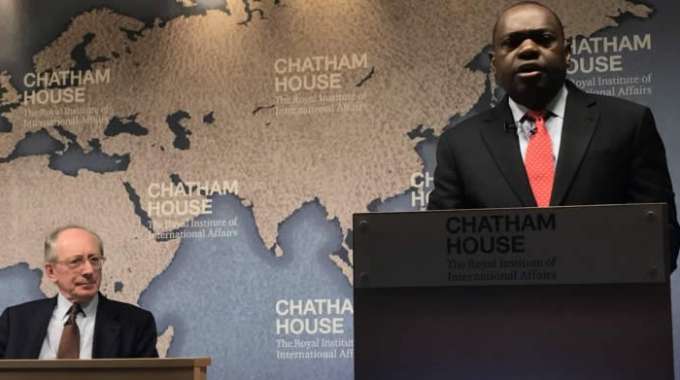 From Caesar Zvayi in LONDON, England
PRESIDENT Emmerson Mnangagwa is best placed to solve Zimbabwe’s problems as he has institutional knowledge and experience to bridge the present and the past for a brighter future, Foreign Affairs and International Trade Minister Lieutenant-General (Rtd) Dr Sibusiso Moyo said here yesterday.

Fielding questions at the Royal Institute of International Affairs (commonly referred to as Chatham House) and in response to a question as to why President Mnangagwa should be trusted when he had been a key member of the Mugabe administration, Dr Moyo said Zimbabwe was lucky in having President Mnangagwa in office.

‘‘In fact, I think Zimbabwe is very lucky to have President Mnangagwa because; one, he is a man who has had the experience of the past, hence he is the man who knows exactly where we went wrong. He is the man who is going to take us (forward), and make those reforms and lead those reforms so that the country can become great again.

‘‘So in my view, he is the most experienced personality who should, therefore, be given a chance to actually deliver Zimbabwe to a new destination,’’ Dr Moyo said to applause from the packed hall.

Dr Moyo addressed the gathering that brought together academia, business, government and civil society at Chatham House under the theme “Zimbabwe’s re-engagement and socio-economic recovery”.

The highly interactive exchange that also drew British Ambassador to Zimbabwe Mrs Catriona Laing, was moderated by Sir Malcolm Rifkind, who was British Secretary of State between 1995 and 1997 under the administration of then premier Mr John Major.

Chatham House is an independent policy institute that brings together government, business and civil society in open debate over significant developments on the global stage.

The opposition MDC-T has tried to conflate President Mnangagwa with former president Mr Robert Mugabe’s rule despite the fact that President Mnangagwa’s ascendance came on the back of a nationwide realisation that Mr Mugabe was straying from the ideals of the liberation struggle after falling into the clutches of a criminal cabal led by Mrs Grace Mugabe.

NB: The full transcript of Dr Moyo’s interactive session at Chatham House will be reproduced as a Question and Answer in The Saturday Herald.

Newer Post
Govt goes online to grow tourism
Older Post
Zimbabwe is confronting its past head-on. We are ready to embrace the world