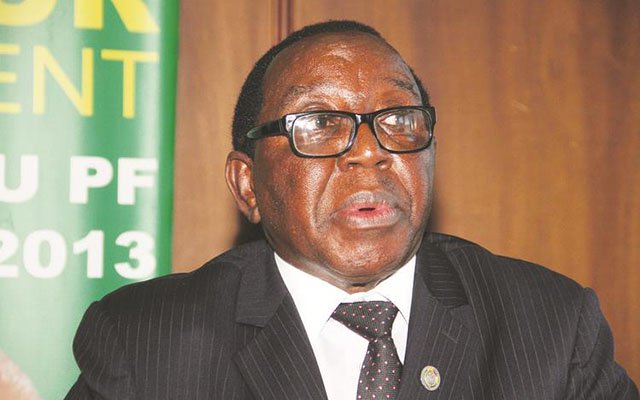 CDE KHAYA MOYO . . . “ZANU-PF will not succumb to any threats, least of all those driving from conduct that is inconsistent with the tenets of democracy and constitutionalism”

Felex Share and Farirai Machivenyika—
Zanu-PF yesterday welcomed the resignation of President Mugabe saying he had overstayed in his position as leader of the country. Zanu-PF spokesperson Cde Simon Khaya Moyo said the former Zanu-PF President and First Secretary deserved a rest. He, however, said Zimbabweans should acknowledge his immense contribution to the development of the country before and after independence.

“The writing was on the wall as evidenced by events of the last few days starting with the intervention by the Zimbabwe Defence Forces (ZDF) and culminating in the impeachment process by Parliament which was to conclude latest tomorrow (today).” He decried President Mugabe’s decision to wine and dine with criminals.

“He had indeed overstayed the hospitality of the people of Zimbabwe. Worse still, he surrounded himself with people of criminal conduct, primitive and disrespectful attributes,” Cde Khaya Moyo said. We must, however, acknowledge that he did so much for the liberation of Zimbabwe and indeed as Prime Minister and President post-independence. He deserves to rest and I believe every Zimbabwean agrees with this position.”

He added: “Our focus should now be to solidify unity, promote peace and proceed with the development agenda for the economic emancipation of our people. The future is indeed in the people’s hands and their aspirations must be met at all times. We wish him well.”

Zanu-PF Chief Whip Cde Lovemore Matuke said President Mugabe had saved his reputation by resigning. “I think the people were determined to remove the President from the Office of the President and now that he has tendered his resignation, he has also saved his face,” said Cde Matuke.

“He is a man who did a lot for the country and needed to rest and also be an advisor to the party. He is an important character for the party. We are excited that the President has made a voluntary decision to retire and we hope that the nation will move forward,” said Cde Matuke.

“We got people in the structures. In the Central Committee we appointed (Cde) Emmerson Mnangagwa to be President and I think he will be endorsed as the President of the country and will pick up from where President Mugabe left off. We have a strong feeling that he will improve the country. Very soon we are going to meet as Zanu-PF at party level to discuss the future and the Attorney-General will intervene and take his post as the AG to ensure that business of the day as Government continues.”

Other reports indicated Cde Mnangagwa was set to assume power in the next 48 hours.

Former Zanu-PF Women’s League political commissar Cde Mabel Chinomona said: “This is unbelievable. As women we had been embarrassed (by Grace Mugabe) and the Women’s League which was a darling of many had become a death trap. We lost a lot of cadres in the top 10 because of her. The Women’s League is now beginning to function and we expect the incoming President to look after women. People would go and kneel before Grace and we were disappointed but now kwakutongakwaro gamba.”

Zimbabwe Chiefs Council president Chief Fortune Charumbira said the decision by the President to resign was commendable. “What he has done is commendable and was the honourable thing to do,” he said.

“It is unfortunate that he had to leave this way given his illustrious history but he was failing to rein in his wife who had taken a habit of humiliating grown-up men in public. That is unacceptable in our culture. We hope that the next President is going to restore that dignity to the country and its leadership that had been lost because of the President Mugabe’s wife.”

Zimbabwe National Liberation War Veterans’ Association secretary-general Cde Victor Matemadanda said it was time for the country to unite and move forward. “What we now need is for all of us to unite and rebuild our country now that he has decided to resign. We hope that what has happened is a lesson to future leaders that you do not take people for granted because your power resides in them,” he said.

Zimbabwe Liberation War Collaborators vice chairperson Cde Josephine Gandiya said: “We are happy and commend the ZDF for liberating us. We are now in a new era and we hope for the best. Grace is the one who authored President Mugabe’s end and to us she is the Delilah of Zimbabwe. We now expect the country to move forward.”