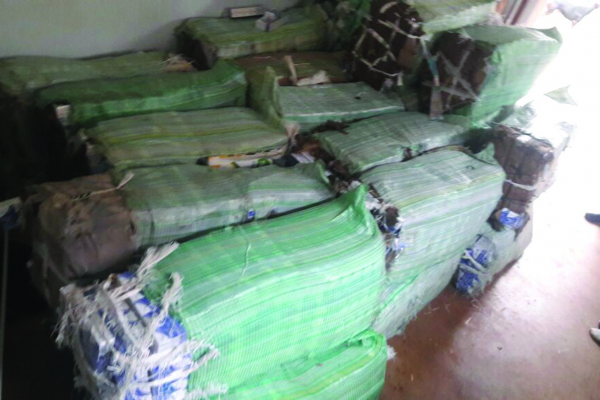 BY REX MPHISA
South African police yesterday intercepted R2,6 million worth of cigarettes that were being smuggled into the neighbouring country through Beitbridge Border Post.

Four people were arrested in Polokwane and Makhado areas for attempting to smuggle the cigarettes.

South Africa Police Service (Saps) said their provincial tracking team nabbed the criminals in two separate incidents in which a cross-border haulage truck and a minibus were used to smuggle the cigarettes of Zimbabwean origin.

“The said truck was spotted at the N1/R71 intersection on the outskirts of Polokwane. Illicit cigarettes worth R1 million were recovered and the suspects arrested. Three of the suspects will also be charged for contravening the Immigration Act.”

He said two foreign nationals aged 23 and 35 were arrested by the Makhado Crime Intelligence, Limpopo Highway Patrol team and Mphephu Crime Prevention Unit for being in possession of illicit cigarettes valued at R1 612 000 during an intelligence-led operation.

“During the arrest, 124 boxes of Remington Gold cigarettes and one Toyota Quantum minibus were seized by the police,” he said.

Both consignments were said to have been smuggled through the Beitbridge Border Post, where both Zimbabwe and South Africa have electronic scans to detect contraband.

It is alleged that Customs and Excise officials were handsomely paid to facilitate the illegal smuggling of cigarettes.

Recently, another Zimbabwe-registered truck was intercepted near Polokwane with a R30 million cargo of illicit cigarettes.