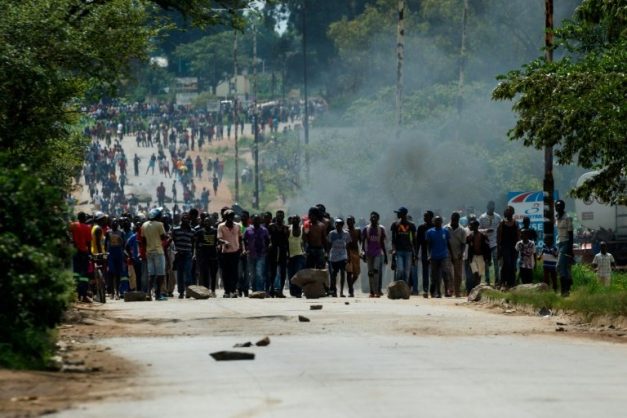 Officials initially dismissed the report as being a 2016 video, adding that it was part of the coordinated attack on Zimbabwe by Western media.

A Zimbabwean police officer who was assaulting a handcuffed civilian in a video clip televised by British broadcaster Sky News has been arrested.

The arrest was confirmed by the information, media and broadcasting services ministry.

“Constable Makumire who was on suspension during an assault on a civilian which was captured in the Sky News has been arrested just as promised by HE Mnangagwa,” the ministry said.

Sky News reported the violent incident on Saturday and president Emmerson Mnangagwa reacted angrily, saying he was “appalled” by the report showing abuses by security forces in a continuing crackdown.

Mnangagwa immediately “instructed that the individuals behind this be arrested”.

However, the police and information ministry officials initially dismissed the report as being a 2016 video, adding that it was part of the coordinated attack on Zimbabwe by western media.

In a sudden turn of events, Zimbabwe Republic Police’s national spokesperson, senior assistant commissioner Charity Charamba, said law enforcement agents had “made inroads into a case of assault by security agents, involving a handcuffed person along Chiremba Road, Harare, as seen in a video clip by Sky News….”

Charamba said Makumire was on suspension and was not on official duty when he committed the offence.

She said the police force was widening investigations to account for the remaining members of the security services ‑ a uniformed police officer and a member of the Zimbabwe National Army.

Crackdowns have been intensifying since protests broke out against the government’s fuel price hikes.

The crackdown by members of the security services left 12 people dead and 300 wounded, some injured by gunshots, according to the Zimbabwe Association of Doctors for Human Rights.