‘Mugabe had become a toddler when it comes to the kind of brutality that we are seeing,’ MDC leader Nelson Chamisa said. 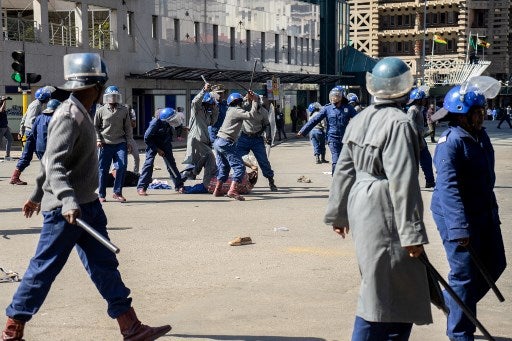 A protester is beaten on the ground by police near Unity Square in Harare on August 16, 2019. Picture: Zinyange Auntony / AFP

‘Mugabe had become a toddler when it comes to the kind of brutality that we are seeing,’ MDC leader Nelson Chamisa said.

Scores of people gathered in a square in the capital Harare to demonstrate against the country’s worsening economy, despite massive police deployment and a ban upheld by a court the same morning.

Police cornered a group of protesters and beat them with batons, an AFP reporter saw.

One woman was seen being carried into a Red Cross ambulance.

“People were just singing… peacefully. Then they saw the police coming — they were encircling people, they were actually surrounding the supporters then they came closer to us and started beating people,” a 35-year-old protester who gave her name as Achise told AFP.

“This is worse than during colonial times,” said a man who declined to be identified.

“We aren’t armed but the police just beat us while we were sitting on the street”.

Police said in a statement they had arrested 91 people for various offences, but rights groups said there had been 128 arrests.

Dozens of police and water cannons were deployed in running battles with protesters, many of them from the opposition Movement for Democratic Change (MDC).

MDC leader Nelson Chamisa slammed the “brutal” clampdown as even worse than during Mugabe’s era.

“We not only have an illegitimate regime in this country, we have a rogue regime,” Chamisa said. Seven people suffered serious injuries, including a woman, he said.

“What is clear is that it’s turning out that the regime in Harare is far worse than the Mugabe regime. One would be persuaded to think that Mugabe is back, but then you realise this — it’s not Mugabe even at his best.

“Mugabe had become a toddler when it comes to the kind of brutality that we are seeing… in terms of just the magnitude of abuse and heavy-handedness.”

Friday’s protests went ahead after MDC plans for large-scale marches were banned by police late on Thursday.

An MDC attempt to challenge the ban in court was then rejected.

The party’s vice president, Tendai Biti, told reporters outside the High Court: “The fascist regime has denied the right for Zimbabweans to demonstrate”.

“There is no difference between Mnangagwa and Mugabe. We jumped from the frying pan into the fire after the November coup,” he said.

Supported by the military, Mnangagwa took over from Mugabe before winning disputed elections in July 2018.

He vowed to revive Zimbabwe’s sickly economy. But many Zimbabweans say the situation has worsened, with shortages of basic goods and skyrocketing prices.

Around five million people — almost a third of the country’s 16 million population — are in need of aid and at least half of them are on the cusp of “starvation”, the World Food Programme (WFP) warned this month.

“Normalcy has returned to Harare,” it added.

Zimbabwe Human Rights NGO Forum, a coalition of 21 human rights groups, on Thursday, said six opposition and rights activists had been abducted and tortured by unidentified assailants ahead of the demonstration. Chamisa said the number had grown to 18.

Chamisa vowed to push on with more protests.

“What you are seeing is just but a teaser, this is an introduction, we are going to be on the streets until the state responds,” he said.

Friday’s protests are the first since rallies in January against Mnangagwa’s decision to hike fuel prices that ended in deadly clashes with troops.

At least 17 people were killed and scores wounded after the army used force, including live ammunition, to crush the demonstrations.

The British embassy in Harare said it was “concerned at the images of the heavy-handed response to disperse crowds in Harare”.