HIGH court Judge Justice Happias Zhou will on Tuesday 12 February 2019 preside over the hearing anddetermination of an application filed by a pro-democracy campaigner seeking an order to suspend theimposition of a punitive tax on electronic transactions. 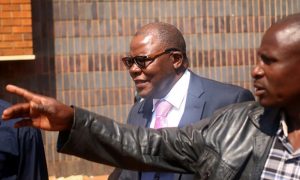 Justice Zhou will hear the application at 9:AM in Court L at the High Court.

In the application filed in October 2018 by Tendai Biti, a member of Zimbabwe Lawyers for Human Rights, Mfundo Mlilo, a pro-democracy activist, argued that government’s decision, which is now being implemented by service operators, was made by Finance and Economic Development Minister Mthuli Ncube without the necessary backing of the law in particular the amendment of the income tax or the regulation of the tax in a statutory instrument.

Mlilo argued that although Ncube had on Friday 12 October 2018 belatedly enacted the Finance (Rate and Incidence of Intermediated Monetary Transfer Tax) Regulation Statutory Instrument (SI205/2018) in which he sought to legalise and actualise his announcement done on 1 October 2018, the statutory instrument still remained unconstitutional and a nullity for a Minister cannot in regulations amend an Act of Parliament.