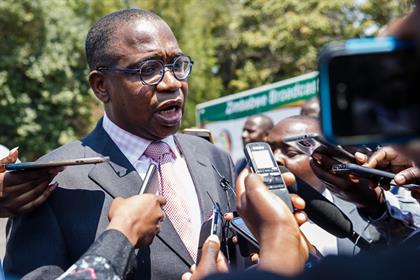 Labour federation, the Zimbabwe Congress of Trade Unions is reportedly calling for nationwide protests on Thursday, as the country has plunged into yet another economic crisis.

Labour federation, the Zimbabwe Congress of Trade Unions (ZCTU) is reportedly calling for nationwide protests on Thursday, as the country has plunged into yet another economic crisis.

According to NewsDay, this came after the country’s finance minister Mthuli Ncube announced a 2% tax on electronic money transfers last week, in a bid to raise money for the cash-strapped government.

Ncube, however, reviewed the tax on Friday, exempting transactions below $10 and capping the tax at $10 000.

But the labour federation maintained that it was going ahead with the planned protests, as the tax was “illegal”.

“Nothing has changed… In fact, the changes simply show that the [Finance] minister [Mthuli Ncube] was attempting to placate the rich and ignore the poor,” ZCTU president Peter Mutasa was quoted as saying.

The tax was supported by President Emmerson Mnangagwa, who said in a post on Twitter that this was “the only way to a stronger economy”.

The tax announcement triggered price hikes and shortages of fuel and some basics like cooking oil over the weekend.

The southern African country was now grappling with “panic buying”, as locals feared the return of the 2008 commodity shortages that left many shops without basic goods.

A New Zimbabwe.com report said over the weekend that panic shoppers were stocking up on essential goods such as beef, bread, cooking oil, and other essentials in anticipation of a looming disaster.

In recent weeks, the country has been running out of essential medical drugs and supplies of fuel have dwindled because importers were unable to secure foreign currency to replenish stocks, the report said.

Last week the privately-owned Financial Gazette reported that prices of basic goods such as mealie-meal, meat, soap, toiletries, rice, sugar and vegetables were spiralling out of control due to a currency crisis precipitated by foreign currency shortages.

The report said that the price increases were set to “worsen consumers’ situation because disposable incomes have always been under pressure due to a combination of poor salaries, high unemployment and the fact that Zimbabwe is a high cost producer”

“The only way to a stronger economy is to restructure, rebuild and reform”

Here is my full statement on our recently announced economic measures: pic.twitter.com/O73qqNM3Pd