Samuel Kadungure in DOROWA
Self-sufficiency in phosphate fertilisers is set to resume, with the Government giving priority to the national policy of expanding Dorowa Minerals Phosphate Mine and processing plant in Buhera to boost local production, create employment, reduce the cost of fertilisers and substantially reduce imports.

Dorowa Minerals is wholly-owned by Chemplex Corporation, which falls under the Industrial Development Corporation (IDC), an investment vehicle under the Ministry of Industry and Commerce.

It is the only producer of phosphate in Zimbabwe and sits on large reserves of phosphate ore, making it a strategic player in the country’s economic development.

The phosphate produced at Dorowa is used in the production of phosphate fertilisers blends such as Compound D fertiliser at Zimphos in Harare.

The mine also produces magnetite, which is exported to Mozambique.

The mine produces 150 000 tonnes of phosphate concentrate per year, and has to date invested US$50 million into its operations.

VP Chiwenga said the Government elevated the fertiliser value chain as one of the priority sectors in National Development Strategy (NDS1) and the Zimbabwe National Industrial Development Plan (2019-2023).

“The development of value chain is a key driver for industrialisation and is a fundamental import substitution strategy, which results in job creation, expansion of industrial base, economic growth, poverty reduction, luring of new investments and technologies as well as improved incomes and revenues into treasury.

“These macro-economic impacts are important as they are in line with the aspirations of the NDS1 as we strive to achieve Vision 2030. The fertiliser value chain players are already implementing the five-year Fertiliser Import Substitution Roadmap in support of local production of fertilisers.

“This is testimony of private sector support of Government policies. The five-year roadmap targets to boost productivity and production of fertiliser, save foreign currency and ensure food security and create employment,” said VP Chiwenga.

The Government, through the Ministry of Industry and Commerce, has also developed a local content strategy to foster local value addition through the use of domestic resources and localisation of supply chains. 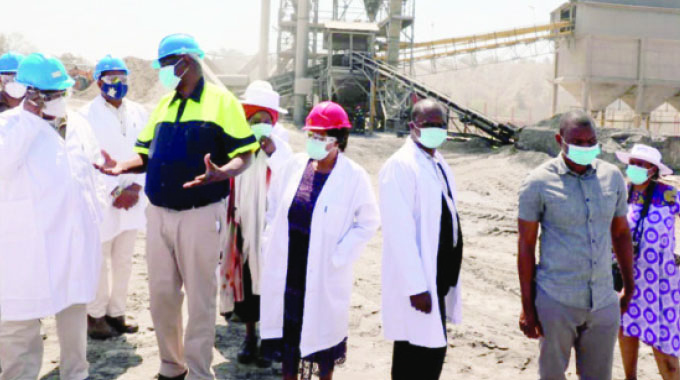 “The strategy will contribute to the reduction of fertiliser imports, which for the past five years reached approximately US$800 million. Therefore, the local beneficiation of our own phosphates will result in massive foreign currency savings through fertiliser import substitution.

“My visit here was motivated by the strategic need to align the operations at Dorowa Minerals to Government policy and the objective to move up the fertiliser value chain and boost local fertiliser production. This will help create employment, reduce cost of fertiliser to farmers and substantially reduce fertiliser imports.

“Dorowa Minerals is a strategic player in the fertiliser value chain and the implementation of the five-year Fertiliser Import Substitution Roadmap. The company will be expected to gradually increase its production capacity to supply the required local demand of phosphates concentrate and to meet the growing local demand of Compound D and other nitrogen, phosphorous and potassium fertilisers.

He noted the cost of the blends of nitrogen, phosphorous and potassium fertilisers produced from local phosphates is lower in real terms than the imported product. The huge foreign currency savings would come because the local product requires 50 percent less foreign currency to produce.

VP Chiwenga said Government will continue lend support to the mine for it to adequately supply the requirements of the fertiliser value chain.

“Our vision and aspiration as a nation, can only be realised if companies like Dorowa Minerals, which has an impact on the development of other vale chains, are adequately supported. There is a growing demand for phosphates and magnetite in the export market, and it is Government’s wish that Dorowa Minerals increases export of both phosphate and magnetite into the region and beyond, to take advantage of the trade agreements that we have signed at SADC, COMESA, the Africa Continental Free Trade Area (AfCFTA) and the European Union.

It must sustainably continue increasing production. The local beneficiation of our own phosphates will result in massive foreign currency savings through fertiliser import substitution, fertilizer price reduction for the final consumer, employment creation and balance of payment support,” said VP Chiwenga.

VP Chiwenga, who is also the Minister of Health and Child Care, commended the company for vaccinating all its employees and their familes.

He urged all Zimbabweans to be vaccinated.

Newer Post
Covid-19 vaccinations: More get jab …. Find out where to get yours
Older Post
16 succumb to Covid-19