Zim to wait a little longer to access US market 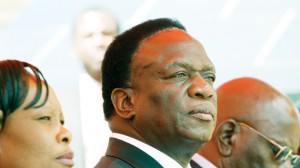 Source: Zim to wait a little longer to access US market | The Financial Gazette February 16, 2018

ZIMBABWEAN firms will have to wait a little longer to access the $211 billion United States of America market under the African Growth and Opportunity Act (AGOA).
US State Department acting director for economic and regional affairs, Harry Sullivan, told TheFinancial Gazette on Tuesday that despite the change of government in Zimbabwe, the southern African country will not be immediately eligible to benefit from the AGOA programme.
“Every year there is an inter-agency process in Washington that considers new AGOA-eligible countries, and this year, in fact, we anticipate that The Gambia and Swaziland will rejoin AGOA,” he said in a telephone interview.

“Zimbabwe — because the changes there are so new and because the group starts meeting really in the middle of each year — we anticipate that we’ll be discussing Zimbabwe this year. The other thing is that the situation is still new; we are very optimistic, along with the Zimbabwean people, that change will continue to be positive and it’s a situation that we’re monitoring,” Sullivan said.
Zimbabwe has never been eligible to access the market due to the country’s human rights record and lack of respect for property rights.

Currently, 38 African countries are eligible for AGOA, which extends duty-free access to the US market across 6 000 tariff lines.
The US determines whether countries in sub-Saharan Africa meet its published eligibility requirements on a yearly basis and beneficiary status can be granted, or withdrawn, at the discretion of the US President.

However, there’s renewed optimism in the country following the ascendancy to power of President Emmerson Mnangagwa, who is perceived as pro-business, raising expectations that foreign capital inflows would increase.

Mnangagwa replaced Robert Mugabe, who ruled the country for 37 years until his resignation in November last year when the army and his ZANU-PF party turned against him.
Sullivan said there’s huge potential in African countries to benefit from American markets under AGOA, which has since been extended to 2025.

“There’s also huge potential for African businesses in the United States. It’s not easy, but I think businesses that have been able to take advantage successfully of the American market have benefitted significantly and I would encourage you all to promote AGOA among the private sector in Africa, and work with our trade hubs in order to make concrete opportunities happen,” he said.
In 2017, US-Africa trade rose by 15,8 percent, from $33 billion the previous year to $38,5 billion.
US exports to Africa rose four percent to $13,1 billion and African exports to the US rose by more than 20 percent to over $24 billion.

Increased oil exports, which are not covered by AGOA, accounted for a large share of the increase. Sullivan said there were also some “encouraging signs of diversification”.

For instance, African agricultural exports increased 10 percent to $2,7 billion and an increasing number of countries took advantage of the benefits available under the legislation.
Between 2016 and 2017, Ghana saw its exports under AGOA quadruple to more than $300 million, while Madagascar and Ethiopia took advantage of the market access granted for footwear and garments, with the two countries’ exports to the US rising to $152 million and $92 million respectively.