Zim will develop with or without sanctions: ED

Source: Zim will develop with or without sanctions: ED – NewsDay Zimbabwe May 30, 2019 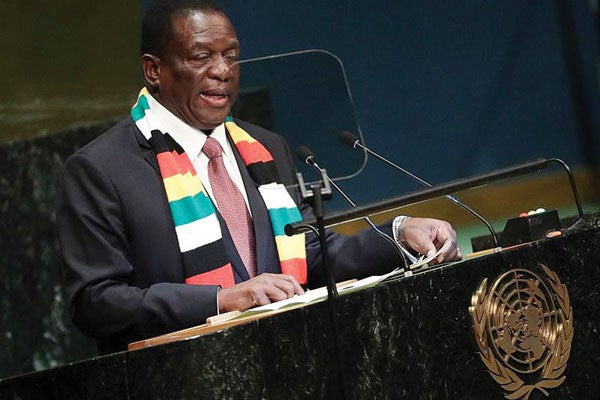 PRESIDENT Emmerson Mnangagwa has pledged that his government will grow the economy and improve the lives of poor Zimbabweans regardless of the sanctions imposed on the country by Western countries.

Speaking during an official visit by Tanzanian President John Magufuli, Mnangagwa said although sanctions were slowing down economic growth and hurting the poor, his government had put in place a plan to salvage the comatose economy.

“Our economy was greatly affected by the sanctions imposed on us nearly now close to 18 years. Under the new dispensation, we have said with or without sanctions, we must focus on developing our economy,” Mnangagwa said.

“We will use our own domestic resources to industrialise, modernise and improve our economy. The speed of development is constrained by the question of sanctions, which my brother (Magufuli) is appealing to those who imposed sanctions on us to remove them.”

He said on the back of mining and farming, the economy was projected to grow by 4,5% by end of year, but admitted the journey would be painful calling on fellow citizens to tighten their belts.

“The areas that have given us the pace to grow is the mining sector and when it’s a good season like the last two or three seasons, agriculture also helps us to grow. So the agricultural, mining and tourism sectors are actually growing,” Mnangagwa said.

“Other sectors like industry and commerce are constrained by the fact that we have to retool after 18 years of sanctions now. Most of our industry has obsolete equipment.”

Zimbabwe is facing an economic meltdown characterised by company closures, skyrocketing prices and a failing local currency, which is taking a beating from hard currencies both on the black and inter-bank markets.

Magufuli said Zimbabweans needed to give Mnangagwa a chance and support him as he pushes the reforms agenda.

He said in Mnangagwa, Zimbabwe had a critical and important partner for development.