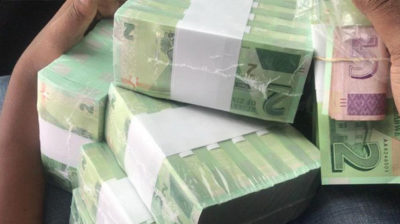 Zimbabwe’s measures to stabilize the country’s currency are finally paying off: the local dollar is heading for back-to-back months of gains for the first time since it was re-introduced 18 months ago.

This comes after the southern African nation’s central bank introduced weekly foreign-currency auctions and cracked down on mobile-money transactions, blamed by authorities for undermining the currency.

The Zimbabwe dollar slumped to 83.39 per U.S. dollar on August 26 after being re-introduced at around Z$3 in March last year. It strengthened 2.3% in September and has edged another 0.1% higher to Z$81.35 on Wednesday, according to central-bank data.

The currency has also strengthened on the black market, where the premium for U.S. dollars, once more than 100%, has narrowed to between 15% and 20% as companies turn to official channels for foreign exchange.

A local website which tracks black-market rates, marketwatch.co.zw, put the street rate at Z$100 per U.S dollar on Wednesday, down from a peak of Z$120. In an Oct. 12 statement, the central bank’s monetary policy committee said stability was achieved after it alloted a combined $291 million at 16 foreign currency auctions since their introduction on June 23.

Newer Post
Re-engagement: Zim needs to do much more
Older Post
The survivor’s guilt of a Zimbabwean in the US