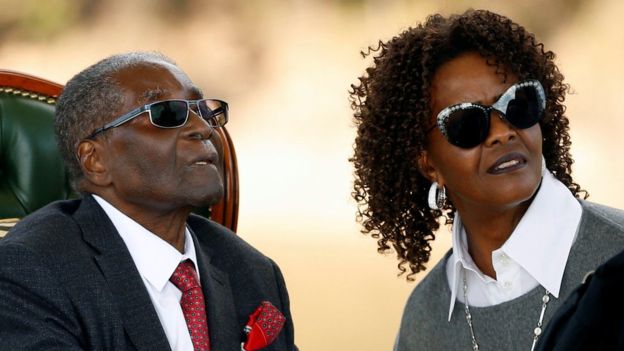 On the eve of the election, the ousted ex-president vows not to vote for his Zanu-PF successor.

Zimbabwe’s ex-president Robert Mugabe has given a surprise press conference on the eve of the nation’s elections.

Mr Mugabe said he would not support his successor in the Zanu-PF party, Emmerson Mnangagwa, after being forced from office by the “party I founded”.

“I cannot vote for those who tormented me,” he said. “I will make my choice among the other 22 [candidates].”

Zimbabweans go to the polls on Monday in the first vote since Mr Mugabe was ousted in November.

What did Mr Mugabe say?

Speaking from his home in the capital, Harare, on Sunday, the former president again said he had been “sacked” as part of a military coup and that he left office in order to “avoid conflict”.

He said that he now wished the leader of the opposition Movement for Democratic Change (MDC), Nelson Chamisa, well in Monday’s vote.

“He seems to be doing well, and if he is elected I wish him well,” he said.

When asked by the BBC’s Fergal Keane if he would like to see Mr Chamisa gain power in Zimbabwe, Mr Mugabe, 94, indicated that he was the only viable candidate.

I press #Mugabe to say if he’d prefer #Chamisa to win than see #Mnangagwa returned to power. Ends up saying in essence they Chamisa the only viable candidate.

Mr Mugabe said: “I hope the choice of voting tomorrow will throw, thrust away the military government and bring us back to constitutionality.

“Let tomorrow be the voice of the people to say never again shall we experience a period where the army is used to thrust one person into power.”

Mr Mugabe also denied that, as president, he had planned to hand the leadership to his wife, Grace, saying it was “utter nonsense”, and suggested that ex-defence minister Sydney Sekeramayi should have taken over.

Mr Mugabe added that, since he was forced from office last year, “the people of Zimbabwe have not been free”.