Zimbabwe: How MSF’s Rural Programme for HIV+ Villagers Has Worked

Interview – Medecins Sans Frontiers Director in Zimbabwe Bjørn Nissen talks about the importance of the Mwenezi project, the adolescent projects in Mbare and shares the challenges of being on the frontline of fighting against the HIV/Aids pandemic in the Southern African country. 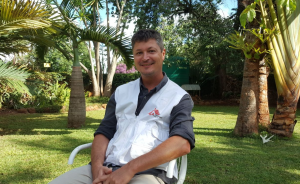 Harare — Medecins Sans Frontiers Director in Zimbabwe Bjørn Nissen talks about the importance of the Mwenezi project, the adolescent projects in Mbare and shares the challenges of being on the frontline of fighting against the HIV/Aids pandemic in the Southern African country.

Why is MSF’s work in Zimbabwe important?

Nissen: MSF has been in Zimbabwe for the last 18 years doing different kind of co-operations. This started more as a sabbatical HIV mission offering huge needs when there was a prevalence of 30%.

Then over the last five, six years, it diversified a lot. So now we do everything from water and sanitation to cervical cancer, diabetes, hypertension, non-communicable diseases. We also do traditional HIV programmes. And with the adapting to 2018 with different service delivery models, and we just finished a project which was focused on sexual and gender-based violence, which is a big problem. But due to the good performance of the City of Harare (projects), we will continue next year with them with the adolescents and sexual reproductive health.

These are the main medical areas. In addition we work on the border with South Africa and Beitbridge on migration trying to define what could be the more ultimate package of medical care for migrants (persons on the move). So it’s a very variety portfolio that we have compared to what we had 10 years ago.

And the HIV projects you have, particularly in Mwenezi?

Nissen: So Mwenezi is a typical project where the team has been very involved in defining what we should be doing because we started in the facilities and we did the outreach and they continued to see the needs in the peripheral. They came up with the OFCAD model – Out of Facility Community ART Distribution concept – which is adopting to what we have been already been doing in other countries, but adapted to the rural settings. And it is just a way to put patients in their centre and to move to services as close as possible to them. So when they need to avoid to travel for 60 to 100km, or spend money on travel, ‘money that they don’t have’, and in the end they will default because they’re vulnerable to inflation.

What kind of results are you seeing since the establishment of the OFCAD model?

Nissen: What we are seeing is that it is in the early stage and will document it as we already do at the MSF. But we see that there is a need, there is a willingness from the village healthworkers to provide the services, and there is a huge willingness from the ministry to let us go ahead and do it. So it is what we would say, a very ground to experiment with this model and I am sure that it will be included in the service delivery menu in the next update just like what we did with the community outreach and groups in the past.

Are there any plans to scale up this project in the future?

Nissen: I think MSF’s main focus is to document it well and then it’s for all the partners to roll it out. We find very small niche needs and document it and scale it up to our other partners like the PEPFAR-funded and the USAID-funded partners, who might not have the same capacity as MSF to be in the frontline in the field but they have big programs that can be rolled out in several districts.

What are some of the challenges you face in Zimbabwe?

Nissen: We can do a lot of things there because we have the good collaboration with the ministry and the local partners. But of course, this comes from working together for several years, being aligned and always in an agreement that we put the beneficiaries in front. What we see now is that the latest financial crisis is again making the population extremely vulnerable because for an example you need to purchase drugs in the local pharmacy and you need to pay in hard cash which is dollars and something that the majority of the population don’t have and this is a big health risk that is putting a lot patients on the risk of defaulting.

We are going to Mbare to see your project with the adolescents. Tell us a little about that?

Nissen: So it’s an adolescents and sexual reproductive health project. So it goes like, when you ask a person with a teenager in the house… you ask them, you have a 12-year-old, did you tell them about family planning and even among colleagues in the MSF, it’s a little bit – “Well, not yet or maybe next year”.

What we know from this catchment group in Mbare is that they start to experiment early with sex and they will be extremely vulnerable. Tthey don’t have a tailored detailed programme that can cater to them and explain to them the dangers and I don’t think we can stop this kind of behaviour, they have opinions about it, but it will happen. So that means they have healthcare system needs to adopt a model adolescent-friendly models that can give these kids a safe place to sit down and get the help and attention they need to avoid to get STIs, HIV, avoid to get pregnant and to avoid to going into termination of pregnancy in which it will be very dangerous if done in an illegal backdoor clinic. So there is a lot of challenge and I think we can again experiment a different model and how to reach the different target populations.

From what we have seen over the past few days, the work you are doing here needs a lot of resources. Are you appealing for more funding?

Nissen: So MSF, we are in an unique position because we are an organisation funded by individuals. For MSF strategy is we get regular donors that contribute as small amount every month or over a long period of time and this create the flexibility that MSF has today, so for example, in a context like in Afghanistan, we cannot afford to be where the authorities don’t want us to be but where the population needs us to be and this is thanks to the individuals for funding. It goes for the same in a country like Zimbabwe, we can really choose where we want to take our battles instead of waiting for funding to commence from an institutional donor and it takes time also.