Robert Mugabe faces being stripped of his office by parliament if he does not resign as president within days, as the political crisis triggered by a military takeover in Zimbabwe moves into a second week.

The 93-year-old had been given a deadline of noon local time on Monday to resign as head of state or face impeachment when parliament reconvenes on Tuesday.

Mugabe ignored the deadline and instead called a cabinet meeting for 9am on Tuesday. A notice from his chief secretary said all ministers should attend. 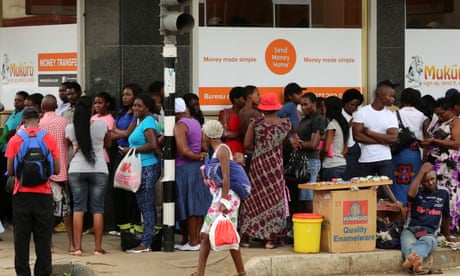 Adding to the confusion, Constantin Chiwenga, the army chief who took power last week, held a press conference at which he described further consultations with “his excellency President Robert Mugabe” held in an atmosphere of mutual respect.

Chiwenga said Emmerson Mnangagwa, the former vice-president whose firing two weeks ago triggered the military takeover, would return to Zimbabwe shortly and was in touch with the president.

“The nation will be advised of the result of talks between the two,” he said.

The general made no mention of the potential impeachment of Mugabe, who was stripped of his party offices by Zanu-PF on Sunday.

A draft impeachment motion published by Zanu-PF said the ageing leader was a “source of instability” who had shown disrespect for the rule of law and was to blame for an unprecedented economic tailspin over the past 15 years.

Although Zanu-PF has the required two-thirds majority in parliament necessary to remove Mugabe, the arrest or flight of some MPs may mean the support of opposition parties is needed for the impeachment motion to pass.

Lawmakers from Zimbabwe’s main opposition party, the Movement for Democratic Change (MDC), will hold a meeting on Tuesday to decide whether to join Zanu-PF to impeach Mugabe, according to officials.

David Coltart, the MDC’s secretary for legal affairs, said he supported the move in principle. “I have long felt he should have been impeached for what he has done of the last decades and for how he has violated the constitution,” he said.

Mugabe stunned the southern African country by failing to resign as expected in a televised speech on Sunday night. Instead, his rambling address offered no substantial concessions to the tens of thousands of people who have marched calling for his resignation, though it did exonerate the army commanders who led the military takeover last week.

The autocrat called for compatriots to avoid “bitterness or revengefulness, which would not make us any better … Zimbabweans,” and said he would preside over a special congress of the ruling Zanu-PF party scheduled for next month.

An array of senior commanders sat beside Mugabe as he made his speech. Constantino Chiwenga, the general who led the takeover, turned the president’s pages as he spoke.

Zimbabwe’s powerful war veterans have claimed Mugabe swapped speeches to avoid resigning during the televised address, and they repeated their call for him to go.

“We were disappointed yesterday in the midst of all those generals he appeared to swap [speeches],” Chris Mutsvangwa, who leads the war veterans, told a press conference on Monday morning.

He said the veterans would call for further protests – including a sit-in outside Mugabe’s Harare residence, where he is being held under house arrest – if the president did not heed calls to quit.

Crowds gathered to pray at lunchtime on Sunday in Harare in one impromptu protest, while students called for Mugabe’s resignation at a mass meeting at the city’s University of Zimbabwe campus.

It is unclear how long the procedure to impeach the president might take but it is likely to last several days. Both houses of the Zimbabwean parliament will have to sit at least twice, with the impeachment motion also going to a committee of senators. If it is passed, Mugabe, who as president is also commander-in-chief of the armed forces, would then be reduced to the status of any other citizen.

Mnangagwa, 75, was appointed interim leader of Zanu-PF on Sunday and is widely expected to take over from Mugabe as president. Mnangagwa, who is known as “the Crocodile”, orchestrated repeated crackdowns on Zimbabwe’s opposition under Mugabe’s rule.

“There is a real danger that [Mnangagwa] can take over Zanu-PF lock, stock and barrel and enjoy the absolute loyalty of the military, too. He’s younger and more energetic than Mugabe,” said the MDC’s Coltart. “There is no doubt he will impose a Chinese style of government, which is more favourable towards business, but he will curtail democratic freedoms.”

The military has said it has no intention of taking permanent control of government but has indicated it does not want to leave Mugabe in office. The military commanders claim last week’s takeover was necessary to remove “criminals” close to the president, a reference to Grace Mugabe and her “G40” faction.

Grace Mugabe, 52, has not been seen since the takeover. Sources told the Guardian she was in her husband’s Harare residence when he was detained on Tuesday and had not moved since.

A spokesman for Theresa May urged a peaceful and swift resolution to the uncertain political situation. “We don’t yet know how developments in Zimbabwe are going to play out but what does appear clear is that Mugabe has lost the support of the people and of his party,” the UK prime minister’s spokesman said.

An analysis of social media by Brands Eye, a South Africa-based opinion analysis firm, shows that reactions online to the coup among Zimbabweans have been largely neutral, though the overall sentiment expressed towards the coup has been more positive than negative. The references to Mnangagwa and Chiwenga became more positive in the days after the coup, though there were more negative than positive references to both.

Newer Post
Robert Mugabe Net Worth: A Look at the Assets of Zimbabwe’s President
Older Post
Someone tell Mugabe that the bus has left