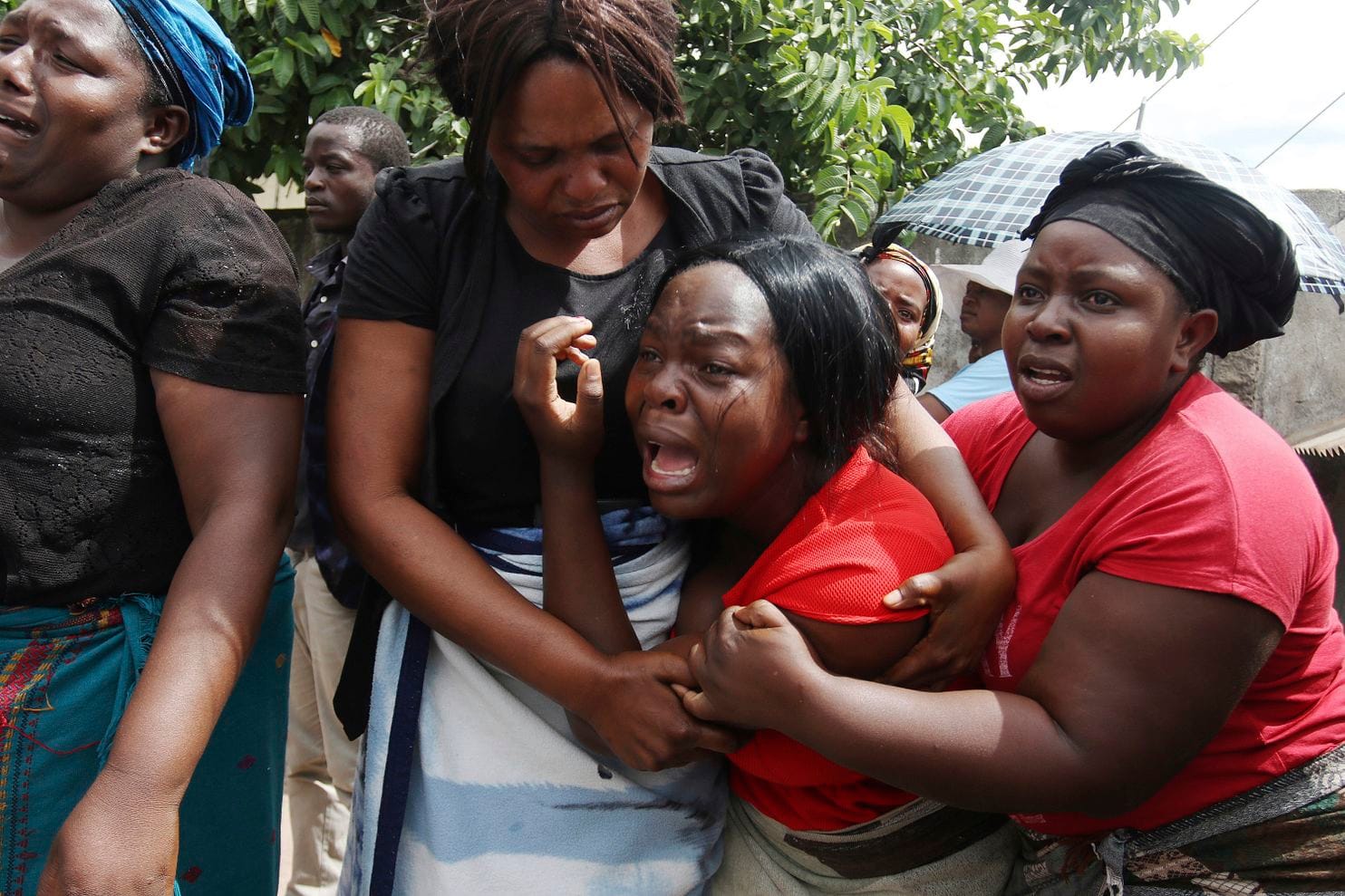 A family member of Kelvin Tinashe Choto reacts during his funeral in Chitungwiza, Zimbabwe, on Saturday. He was killed in a violent crackdown by security forces on protests. (AP Photo/Tsvangirayi Mukwazhi)

Michelle Gavin, formerly President Barack Obama’s senior Africa director at the National Security Council and U.S. ambassador to Botswana, is a senior fellow at the Council on Foreign Relations. Alexander Noyes is a senior associate at the Center for Strategic and International Studies.

More than a year after the ousting of long-serving President Robert Mugabe in a military coup, and six months after the election of new President Emmerson Mnangagwa, Zimbabwe is once more in crisis. Security forces have cracked down brutally on large-scale protests, leaving at least 12 dead, hundreds injured and more than 600 detained. To resolve the crisis, leaders in Zimbabwe, the region and internationally will have to look beyond the artificially constrained choices of the past.

A massive increase in the price of fuel triggered the latest upheaval. Citizens deeply frustrated by the ongoing currency crisis, shortages of critical items such as medical supplies and the absence of real economic progress took to the streets in protest last week. They were met with a heavy-handed state response that has included a social media and Internet shutdown, now a standard tactic in the autocrat’s handbook.

The headquarters of the country’s main opposition party was torched. Activists have reported that security services in some areas have gone from house to house, breaking in and beating the occupants. Police have responded by firing live ammunition in some cases — echoes of the post-election crackdown that left six dead and tarnished Mnangagwa’s victory in the July 30 vote before it was even announced. Meanwhile, the president has been out of the country — but now he’s announced that he’s canceling a planned trip to Davos and returning home because of the current crisis.

Mnangagwa seized power by presenting himself as an alternative to Mugabe and his wife, Grace — a pivot away from how Zimbabwe had been misgoverned for years. He retained power in last summer’s election in part by implying that the real choice before voters was between endorsing him or accepting a full military takeover, the theory being that the military would never allow an opposition victory to stand.

But today, Zimbabweans are being presented with a painfully familiar economic squeeze, an out-of-touch leader seemingly remote from their problems, and highly partisan, abusive security services running rampant with impunity. In a familiar line, the ruling party has blamed the violence on outsiders and the opposition, warning last week that the crackdown was a “foretaste of things to come.” Zimbabweans have ended up with all of the bad outcomes they were led to believe they would avoid by acquiescing to the rebranding of Mnangagwa as Zimbabwe’s savior rather than the architect of some of the Mugabe era’s most brutal excesses. The “new Zimbabwe” looks an awful lot like the old one.

The latest round of unrest differs, however, from earlier ones. This time the demonstrations are not being led by opposition politicians, but by the Zimbabwe Congress of Trade Unions and by a broader base of citizens who are fed up with the sinking economy. Many, especially the large unemployed youth population, feel as if they have nothing to lose. This suggests that protests may continue despite the government’s widespread repression.

Moving forward will require a new approach — from Zimbabwe’s leaders, its neighbors and the international community. First, the Zimbabwe government must rein in the security forces, get them off the street and cease the excessive use of force.

Second, Mnangagwa should undertake key political and economic reforms that are necessary to bring rationality to the economy and confidence to citizens. These include an end to the use of bond notes, the immediate repeal of repressive legislation, and holding those responsible for violence against civilians accountable in the courts, no matter how high up the chain. Zimbabwe’s leaders must send a signal that no one — regardless of the uniform they wear — is above the law. The United States and other members of the international community could help incentivize these reforms by preparing a comprehensive package to assist Zimbabwe’s economic recovery if democratic and economic reforms are genuinely passed and implemented.

Next, a national dialogue should be held to defuse tension and set the agenda moving forward. On Monday, Mngangagwa suggested that such a dialogue may be in the cards. To be effective, such an effort should be truly inclusive, with opposition, business leaders and civic groups all getting a seat at the table. A prerequisite to any successful dialogue will be a commitment to greater transparency from government. This is especially critical when it comes to economic management and how the national budget is allocated. It is unreasonable to ask long-suffering people to have faith in the future without access to financial facts.

The Southern African Development Community (SADC), and its most powerful member state, South Africa, despite a lackluster history of meaningful interventions on Zimbabwe, could play a crucial role in facilitating this process. Additionally, SADC must send clear, unmistakable signals that another military seizure of power will not be tolerated or recognized as legitimate this time around. Zimbabwe’s neighbors can help take the coup option off the table if they have the will to do so.

Zimbabwe is literally burning, and the time to act is now.