New York –State security today arrested documentary filmmaker Zenzele Ndebele and charged him with “possession of offensive weapons at public gatherings,” under Section 43 of Zimbabwe’s Criminal Law Code, according to his lawyers and news reports. 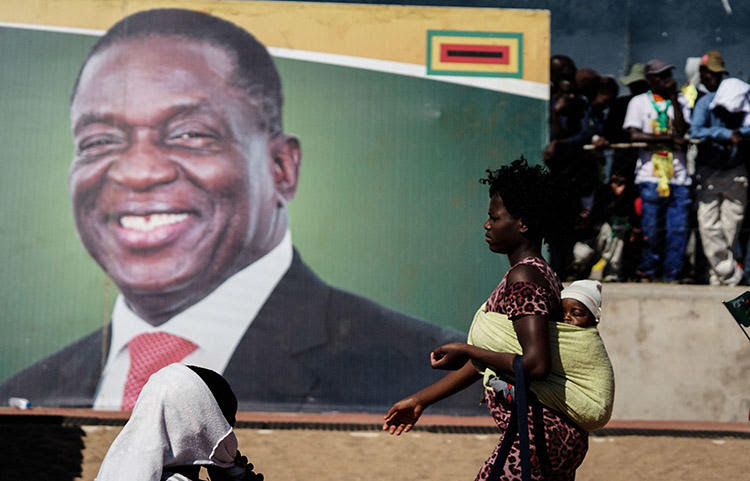 A woman walks in front of a picture of President Emmerson Mnangagwa in Bulawayo, in June 2018. Authorities in the Zimbabwean city detained documentary filmmaker Zenzele Ndebele on March 21. (AFP/Zinyange Auntony)

Security officers found a used tear gas canister in the journalist’s car when he arrived for a meeting between President Emmerson Mnangagwa and civil society organizations at State House in Bulawayo, his lawyers Nqobani Sithole and Lewis Maunze, told CPJ.Ndebele told the security officers that he had picked up the canister at a protest and forgotten about it, Maunze said. Ndebele’s home and office were raided and he is in custody at the central police station until a scheduled court appearance tomorrow morning, local time, Maunze said. Ndebele’s camera operator, Sautsani Ali, was also detained but has since been released, according to the Zimbabwean chapter of the Media Institute of Southern Africa (MISA).“We urge Zimbabwean authorities to release Zenzele Ndebele immediately and to drop the ridiculous charge against him,” said CPJ Africa Program Coordinator Angela Quintal. “His arrest smacks of retaliation for his past work, and makes a mockery of the very idea of dialogue between President Emmerson Mnangagwa and civil society.”Police questioned Ndebele in September about his documentary “Gukurahundi Genocide: 36 years later,” on a massacre by the army of thousands of civilians in the 1980s, according to news reports and a statement at the time by MISA-Zimbabwe. Ndebele told CPJ at the time that he had received death threats.If found guilty, Ndebele could face up to five years in prison or a fine of US$2,000, according to a MISA-Zimbabwe tweet.