English Situation Report on Zimbabwe about Agriculture, Food and Nutrition and Drought; published on 30 Sep 2020 by FEWS NET 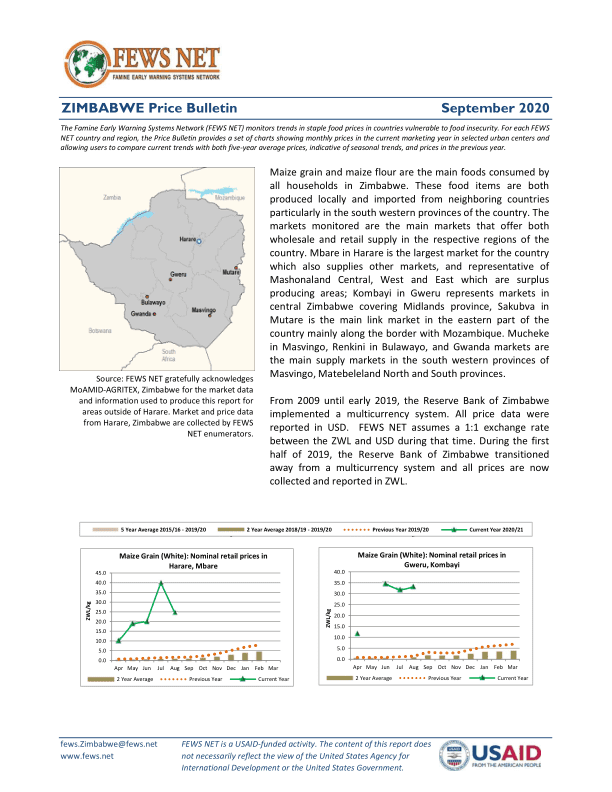 The Famine Early Warning Systems Network (FEWS NET) monitors trends in staple food prices in countries vulnerable to food insecurity. For each FEWS NET country and region, the Price Bulletin provides a set of charts showing monthly prices in the current marketing year in selected urban centers and allowing users to compare current trends with both five-year average prices, indicative of seasonal trends, and prices in the previous year.

Maize grain and maize flour are the main foods consumed by all households in Zimbabwe. These food items are both produced locally and imported from neighboring countries particularly in the south western provinces of the country. The markets monitored are the main markets that offer both wholesale and retail supply in the respective regions of the country.

Mbare in Harare is the largest market for the country which also supplies other markets, and representative of Mashonaland Central, West and East which are surplus producing areas; Kombayi in Gweru represents markets in central Zimbabwe covering Midlands province, Sakubva in Mutare is the main link market in the eastern part of the country mainly along the border with Mozambique. Mucheke in Masvingo, Renkini in Bulawayo, and Gwanda markets are the main supply markets in the south western provinces of Masvingo, Matebeleland North and South provinces.

From 2009 until early 2019, the Reserve Bank of Zimbabwe implemented a multicurrency system. All price data were reported in USD. FEWS NET assumes a 1:1 exchange rate between the ZWL and USD during that time. During the first half of 2019, the Reserve Bank of Zimbabwe transitioned away from a multicurrency system and all prices are now collected and reported in ZWL.