Zimbabwe returning to normal after week of turmoil, violence

Zimbabwe’s capital is returning to normal after a week of turmoil in which Zimbabweans protested dramatic fuel price hikes and government security forces launched a crackdown in which 12 people were killed, according to human rights groups. 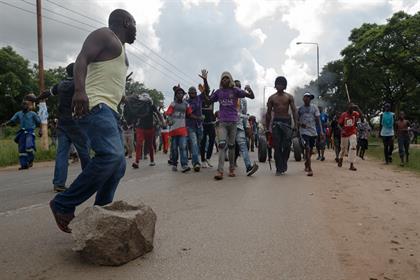 Zimbabwe’s capital is returning to normal Monday, after a week of turmoil in which Zimbabweans protested dramatic fuel price hikes and government security forces launched a crackdown in which 12 people were killed.

Most shops and businesses have reopened, although many people are stocking up on food items in case the country faces further unrest.

President Emmerson Mnangagwa is expected to return to the country late Monday, after announcing on Sunday that he will skip attending the World Economic Forum in Davos, Switzerland. He is in Kazakhstan, after visiting Russia last week.

Mnangagwa had been under growing pressure to return from a two-week overseas visit as accounts emerged of abuses by security forces, including dozens of people wounded by gunfire and others hunted down in their homes and severely beaten. Zimbabwe has seen days of unrest since Mnangagwa made an announcement more than doubling fuel prices that made the struggling country’s gasoline the most expensive in the world.

Indicating the severity of Zimbabwe’s economic problems, South Africa confirmed that it turned down Mnangagwa’s request for a loan of $1.2 billion recently. “We just don’t have that kind of money,” South African treasury spokesperson Jabulani Sikhakhane told the broadcaster, eNCA.

Zimbabwe’s courts are on Monday to hear two cases related to the government’s ongoing clampdown on dissent. The High Court will hear a challenge to the government’s suspension of internet services. Although internet service has been restored after a nearly week-long blackout, social media outlets such as Facebook, WhatsApp and Facebook are still jammed. The government has said its action is to prevent Zimbabweans from organising violent protests.

The blockade “has caused serious inconveniences, loss of business and income, threats to life and the right to health care as people are not able to access vital communication relating to their medication”, said the court application by Zimbabwe Lawyers for Human Rights and the Media Institute of Southern Africa, which urged the court to rule that the government should lift its restrictions.

In a separate court case, the lawyer for activist and pastor Evan Mawarire is trying to get him released on bail. In jail since Wednesday, he has been charged with subversion against the government for which he faces 20 years in jail if convicted. Mawarire had used social media to support peaceful protests against the fuel price increases. The case against Mawarire is a “travesty of justice” said his lawyer, Beatrice Mtetwa.

In the widespread crackdown, more than 600 people have been arrested of which more than 400 have been denied bail, said Mtetwa.

When Mnangagwa tweeted Sunday that he would cut short his European trip and to come back to Zimbabwe he didn’t mention the violence, saying only that he is returning “in light of the economic situation.” He said his first priority “is to get Zimbabwe calm, stable and working again.”

At Davos, he planned to appeal for foreign investment and loans, but the visit had been expected to be a challenge. His Davos visit a year ago came shortly after he took over from longtime, repressive leader Robert Mugabe, a move cheered by Zimbabweans and the international community.

But Mnangagwa has faced a year of troubles in which his administration failed to improve the collapsed economy, narrowly won a disputed election and violently put down anti-government protests.

The Zimbabwe Catholic Bishops’ Conference last week lamented the government’s “intolerant handling of dissent” and its failure to halt economic collapse, concluding that “our country is going through one of the most trying periods in its history.”