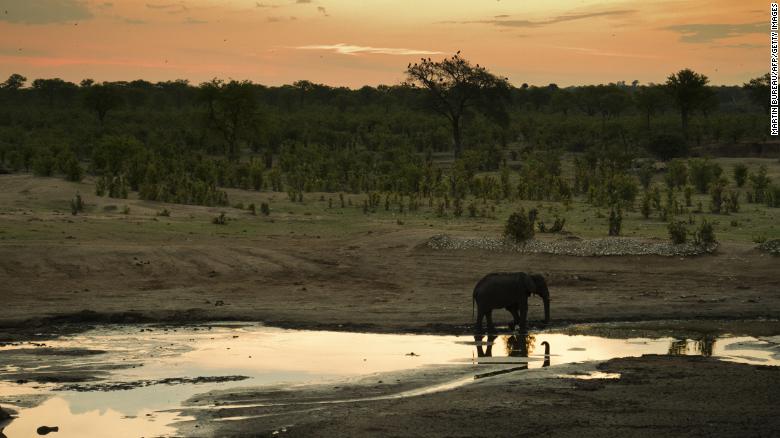 An elephant is pictured in Zimbabwe’s Hwange National Park in November 2012.

Harare (CNN)A severe drought that has drained water sources in Zimbabwe’s largest national park has left 55 elephants dead since September, a spokesman for the country’s wildlife agency said on Monday.

Some of the animals died while searching for water at the Hwange National Park. Others were killed by residents after wandering into surrounding communities looking for food, Tinashe Farawo, spokesman for Zimbabwe’s Parks and Wild Life Management Authority said.

“The elephants are traveling long distances to look for water and end up invading communities. Some died of thirst in the park, some while in search of water. Community members killed others after they destroyed their properties,” Farawo said.

Twenty people have killed in human-animal conflict in the country since January, according to the spokesman.

Farawo said an elephant mauled a man to death after he tried to chase the animal, which had wandered into his garden to drink water in his backyard in a local settlement last week.

“That’s why we are saying allow us to trade in these animals, and we can raise funds for their security and food. But the so-called conservationists condemn us. The park was meant for 15,000 elephants, but we are now talking of over 50,000,” he said.
Farawo said the water crisis at the park was at a dire stage, and authorities have had to dig boreholes deeper to provide care for the animals.
The El-Nino drought that lasted between last October and May has devastated water sources in Zimbabwe, and citizens are bearing the brunt of the disaster.

Zimbabwe’s government has often complained about its elephant numbers, arguing that selling the animals will help reduce their population and generate funds to care for them, a position that has been opposed by animal conservationists.

In May, Zimbabwe said it had made $2.7 million from the sale of 90 elephants to Dubai and China, and profits will be plowed into animals conservation efforts.

Lenin Chisaira, director of Advocates4Earth, a group challenging a purported plan to sell 35 elephants to countries in Asia, said the water problems at the park were not enough to justify elephants’ sale.

Chisaira said mining operations in Hwange have contaminated water sources and affected grazing lands, leaving the animals with no choice but to fend for themselves.

“The government has over the years been allowing mines to develop in Hwange and that’s reducing grazing land, and those operations have impact on water. Even polluting the water. So the government is squarely to blame for all this,” Chisaira told CNN.