Zimbabwe threatens to cut off relations with US

Source: Zimbabwe threatens to cut off relations with US – Business Live

The attack came after the US ambassador to Zimbabwe said corruption, not sanctions, are behind the country’s economic crisis 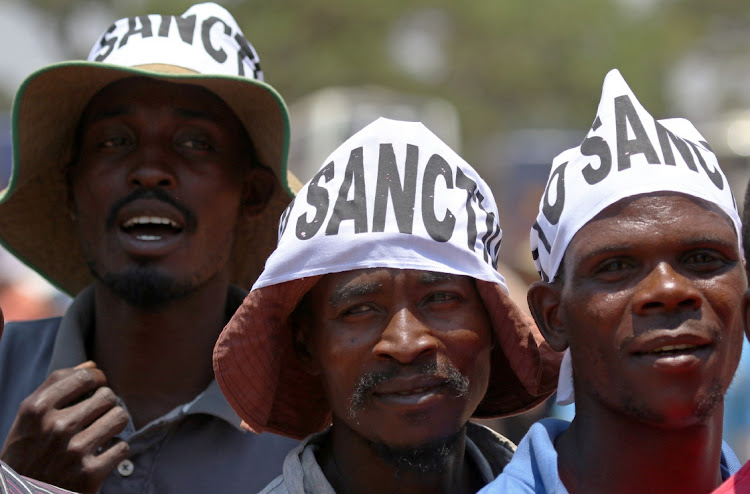 Government supporters march against Western sanctions at a rally in Harare, Zimbabwe, in this October 25 2019 file photo. Picture: REUTERS/PHILIMON BULAWAYO

Harare — On Thursday, Zimbabwe’s foreign affairs minister Sibusiso Moyo threatened to cut off diplomatic ties with the US after he sharply criticised US ambassador to Zimbabwe Brian Nichols and called him an “opposition citadel”.

The scathing attack on the US ambassador has left relations between the two countries at a new low, despite efforts by Zimbabwe’s government to re-engage with the US, which has imposed economic sanctions on the country.

Moyo’s attack on Nichols came after the US diplomat rubbished the Sadc campaign to lift sanctions on Zimbabwe and said corruption, not sanctions, are behind the country’s economic crisis.

On October 25, the day Sadc set to support lifting of sanctions on Zimbabwe, the US responded by slapping more sanctions on state security minister Owen Ncube, accusing him of human rights abuses and involvement in a recent series of state-sanctioned abductions against those who oppose the government.

Ncube is a close ally of President Emmerson Mnangagwa and the new sanctions were seen as a slap in the face for the president.

In a strongly worded statement, Moyo, a former army general who announced the military coup to topple former president Robert Mugabe in 2017, said Zimbabwe is ready to ignore the US.

“We genuinely seek dialogue with all well-meaning countries as part of our re-engagement efforts but our openness and the innate generosity of spirit of all Zimbabweans should not be taken for granted and should certainly not be abused,” said Moyo. “We have the means to bring all this to an end, should we deem it necessary or should we be pushed too far.”

Moyo did not specify what had peeved Zimbabwe’s government but angrily accused the US diplomat of backing the opposition.

“The unfortunate statement made by the US ambassador on the occasion of the Sadc anti-sanctions day on October 25 exhibited a clear contravention of acceptable diplomatic etiquette, was grossly partisan in nature, and reflected not only a worrying lack of respect for the host government but was also abusive of the hospitality of the people of Zimbabwe as a whole,” said Moyo.

Zimbabwe has had strained relations with the US since 2002 when Washington imposed sanctions on the country. The sanctions were triggered by a violent land-reform exercise and gross human rights violations that included killings of white former commercial farmers.