Arda-Nijo Estates has reportedly been transferred from the government to Zanu PF party through a letter written by Agriculture Perence Shiri acting on the authority of the President ED Mnangagwa.

In a letter dated 26 June 2020 posted revealed by prominent journalist Hopewell Chin’ono, the President allegedly directs his cabinet Minister Perence Shiri to inform the estate management about the ownership changes at the Domboshava farm.

The farm which was once owned by ZAPU, was transferred to the government in 1984 as many other farms during the period. 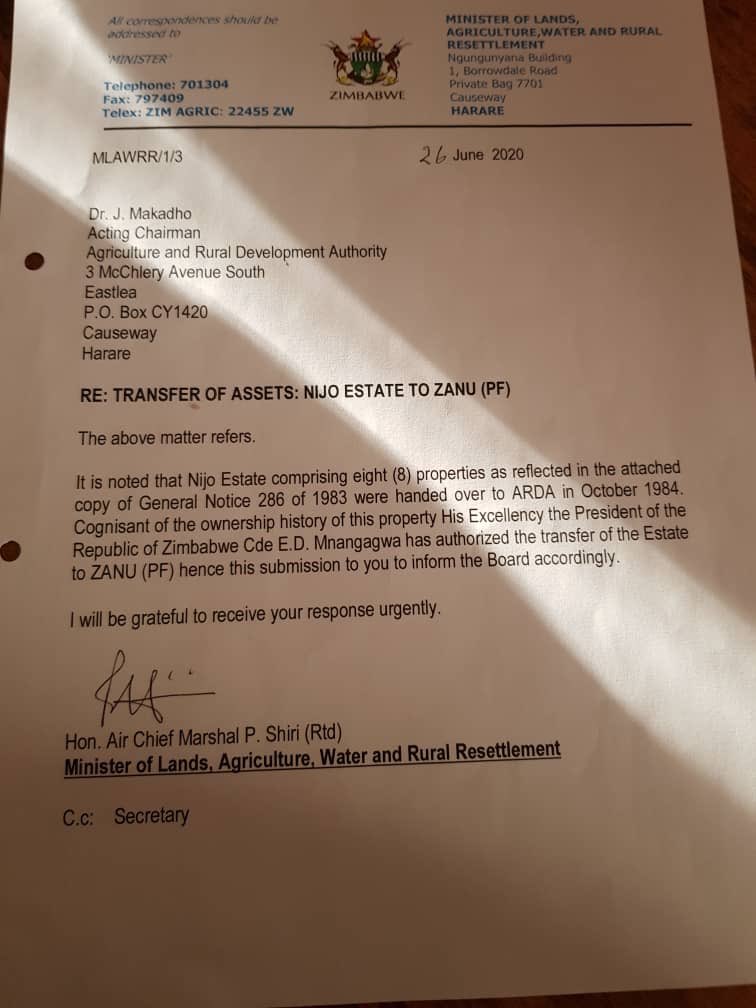 Part of the letter by Shiri read, “It is noted that Nip Estate comprising eight properties as reflected in the General Copy of Notice 286 of 1983 were handed over to ARDA in1984. Cognisant of the ownership history of this property, His Excellence The President of The Republic Of Zimbabwe Cde ED Mnangagwa has authorised the transfer of the estate to Zanu PF hence this submission to you to inform the board accordingly. I’m grateful to receive your response urgently.”

The letter has been met with disgruntlement from Zimbabweans who expressed their shock in the way government property is being transferred to private institutions illegally.

Here are some of the responses from concerned Zimbabweans on the transfer of ARDA- Nijo to Zanu PF.

“Boom another scandal, how do you just transfer a property from government to Zanu PF”

“Is this not under a JV/PPP arrangement. What is the implication on the partnership. Maybe Zanu PF is getting in a joint venture with Arda-Nijo.

“How does a political party own land it did not buy?”

“No one will invest where a political party owns the properties.”